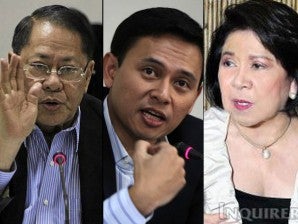 The electoral matchups in many parts of the country for 2013 show veteran politicians returning to the campaign trail to protect turf or to reclaim their old posts.

Families long entrenched in local politics are also asserting their strength in next year’s elections.

Politicians may have switched parties but virtually the same faces and names will file their certificates of candidacy (COCs) starting Monday.

The Marcoses of Ilocos Norte, Singsons of Ilocos Sur, Ortegas of La Union and Dys of Isabela are up for reelection. In Aurora, the Angaras are consolidating power in their home province, with family members also vying for seats in the Senate and the House of Representatives.

Outgoing Sen. Edgardo Angara of Laban ng Demokratikong Pilipino and Vice Gov. Gerardo Noveras of the Liberal Party (LP) are likely to square off in the gubernatorial race.

Outgoing Gov. Bellaflor Angara-Castillo, the senator’s sister, is returning to the House to replace her nephew, Rep. Juan Edgardo Angara, who is running for senator under the LP.

In Pampanga, Gov. Lilia Pineda is running for reelection under her newly formed party, Kambilan, with her only son Dennis, former mayor of Lubao, as running mate. Dennis is seeking to fill in the seat of Vice Gov. Joseller Guiao, who is running for representative of the first district.

Sen. Manuel “Lito” Lapid is known to be campaigning for his youngest son, Maynard, who will run for vice governor.

Former President Gloria Macapagal-Arroyo is seeking reelection in the second district of Pampanga.

Rep. Czarina Umali, the governor’s wife, is seeking reelection in the third district.

All eyes are on the Laoag mayoral race, however, with members of the Fariñas clan likely battling for the post that three-time Mayor Michael Fariñas will vacate next year. The mayor’s wife Chevylle, president of the Association of Barangay Captains, has made known her interest in running for mayor.

In Ilocos Sur, the Singsons will try to maintain its dominance in the province with reelectionist Gov. Luis “Chavit” Singson facing a former ally, Tagudin Mayor Roque Verzosa Jr., in the gubernatorial race.

Singson will run with reelectionist Vice Gov. Deogracias Victor Savellano, who will face former Singson ally and former Board Member Efren Rafanan. In the second district, former Deputy Speaker Eric Singson is returning to the House to replace his son, Eric Jr.

In La Union, old political names are seen to dominate again the elections, with Gov. Manuel Ortega running for his third term and his brother, Victor, for his third and final term as representative of the first district.

The recent feud among the province’s leaders has caused the once-dominant Abante Vizcaya to split, with factions led by Rep. Carlos Padilla and Gov. Luisa Cuaresma, who are former allies.

Cuaresma is eyeing the lone congressional seat and is likely to challenge Padilla.

Vice Gov. Jose Gambito has announced his plan to run for governor and is expected to face Gerdan, president of Poro Point Management Corp.

In Cagayan, former Rep. Manuel Mamba said he was planning to challenge the reelection bid of Gov. Alvaro Antonio.

In Quirino, Gov. Junie Cua and his son, Rep. Dakila Carlo Cua, along with Vice Gov. May Garnace-Calaunan, are likely to seek second terms next year under the LP.

In Baguio City, the tandem of Rep. Bernardo Vergara and Mayor Mauricio Domogan expects a challenge from former Councilor Jose Molintas, who has plans to run for representative next year, and Marquez Go, who is being groomed for the mayoral post by a loose alliance of opposition leaders.

In Iloilo, the LP has brought traditional political rivals—the Tupas, Garin and Defensor clans—under one ticket.

Defensor’s reelection bid will be challenged by Rep. Ferjenel Biron (fourth district), who is the gubernatorial candidate of UNA. Biron’s brother, Hernan Jr. is UNA candidate in the fourth district, against Niel Sr. His father, Hernan Sr., will run for reelection as mayor of Barotac Nuevo, while his mother, Diana, is the first nominee of the Abyan Ilonggo party-list group.

The Garins are expected to maintain their dominance in the first district. Vice Gov. Oscar “Richard” Garin Jr. will run for congressman to replace his wife, third-termer Rep. Janette Garin, under the LP. He will face Miag-ao town Mayor Julieta Flores (UNA).

Oscar’s sister, Christine, is running for reelection as mayor of Guimbal town while another sister, Rep. Sharon Garin, is the first nominee of Aambis, Owwa party-list group.

Augusto Syjuco will run as UNA candidate for representative of the second district to replace his wife Judy. He will be challenged by the LP’s Pavia Mayor Arcadio Gorriceta.

In Antique, a coalition called “Bag-ong Antique,” which is allied with PDP-Laban and UNA, is seeking to remove from office Gov. Exequiel Javier and his son Rep. Paolo Everardo Javier.

Lawyer Cornelio Aldon is expected to run for governor. He ran for congressman in 1992 but lost to Exequiel Javier.

Old political clans are expected to dominate the 2013 polls in Cebu, unlike in Negros Oriental where it will be a battle of old and new names.