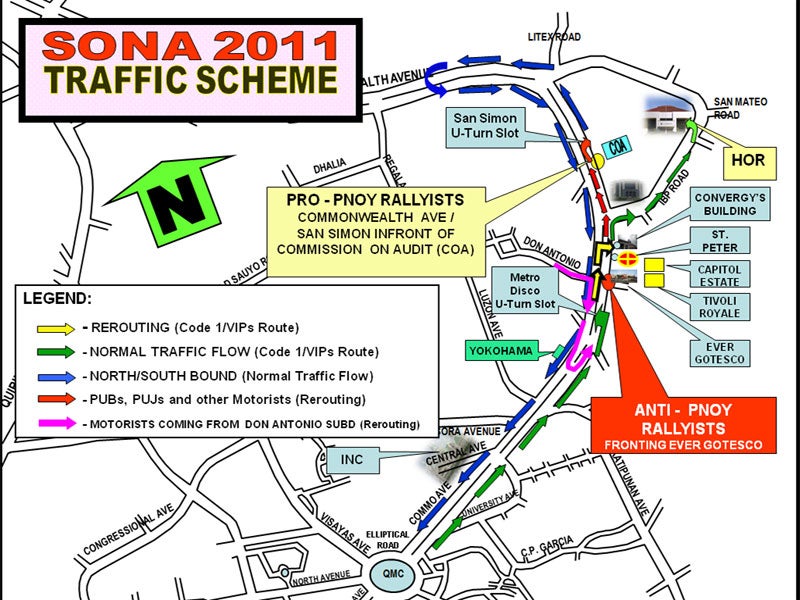 Traffic rerouting scheme on Commonwealth Avenue for Monday, when President Benigno Aquino delivers his second State of the Nation Address in Congress. Image courtesy of PNP

NCRPO Regional Director Alan Purisima said that the southbound stretch of Commonwealth Avenue will be open to traffic the whole day. The four lanes of Commonwealth Avenue southbound will be occupied by northbound vehicles from Shopwise U-turn slot until the San Simon U-turn slot wherein normal traffic flow for all types of vehicles will be again open for the northbound area after the event.

“Concrete barriers at Convergy’s U-turn slot will be removed on Monday, at 12:01 a.m. which will serve as an entry point for VIPs going to Sandiganbayan Building,” Purisima said. 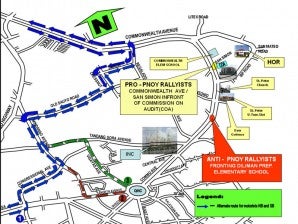 Alternate route for motorists on Commonwealth Avenue for Monday's State of the Nation Address on Monday. Image courtesy of PNP

Meanwhile, Quezon City Police District Director Police Chief Superintendent George Regis said that 10 Metropolitan Manila Development Authority tow trucks and two tow trucks from the Department of Public Order and Safety will be deployed in the Sandiganbayan area to ensure that no vehicles will cause heavy traffic flow. Traffic aides will be deployed and appropriate signages will be installed to guide the motoring public of the alternate routes.

Regis also said that pro- Aquino rallyists are designated to hold their activities along Commonwealth Avenue in front of the Commission on Audit (COA) building, while anti- Aquino rallyists were allowed at the Quezon Memorial Circle as per an approved rally permit.