Security at Iloilo airport under review 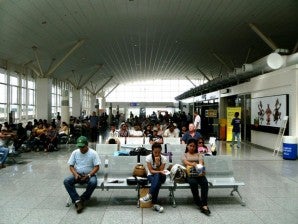 ILOILO CITY, Philippines – The authorities are reviewing security at the Iloilo Airport following a breach that allowed a non-passenger, a boy said to be mentally disturbed, to board an aircraft that was preparing to take off early this week.

Chief Inspector Efren Laquihon, chief of the Iloilo station of the Police Center for Aviation Security (PCAS), said the 16-year-old boy was discovered in a Zest Air plane around 6 p.m. on Tuesday as the plane was preparing to leave for Manila.

The boy was found in the plane after flight attendants conducted a head count and found one passenger too many.

The boy was singled out after passengers were asked to present their boarding passes.

Authorities still do not know how the boy got in the plane, but Chief Insp. Laguihon said he could have scaled the perimeter fence in an unguarded area of the airport and climbed the boarding stairs to the aircraft that could have been unguarded, too.