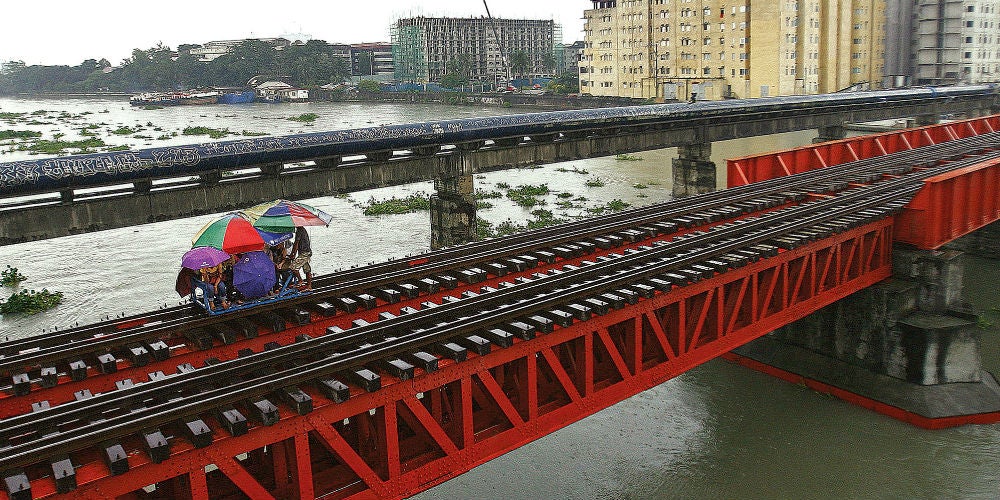 Nearly a month after monsoon rains inundated large parts of Metro Manila, President Aquino and his Cabinet on Tuesday gave the green light for a P351-billion flood-control system that is expected to be completed in 2035.

The National Economic and Development Authority (Neda) board, chaired by Mr. Aquino, also approved the extension of the Light Rail Transit (LRT) Line 2 from the Santolan station in Pasig City to the Masinag Junction in Antipolo City, and the acquisition of additional coaches for MRT 3.

The flood-control master plan, the LRT and MRT projects, the construction of airports in Daraga, Albay province, and Panglao in Bohol province, as well as the upgrade of roads and bridges were approved by the Neda board in Malacañang.

Together with the P351-billion  flood-control master plan, the total cost of the projects is P407.4 billion.

The projects would be funded by the national budget, loans and grants, and public-private partnerships.

“The [flood-control] master plan has been approved by the Neda board with the initial allocation of P5 billion,”  Communication Secretary Ricky Carandang told reporters after the meeting. “That will happen immediately.”

In the aftermath of last month’s deluge in Metro Manila and  the central and southern parts of Luzon, triggered by weeks of monsoon rains, the Department of Public Works and Highways (DPWH) unveiled the master plan to address the perennial flooding in the metropolis.

An environment lawyer said there was a cheaper, faster and natural way to address flooding in Metro Manila. Antonio Oposa Jr., a Ramon Magsaysay awardee in 2009, proposed that P100 million be set aside to acquire property for water collection ponds.

“Let’s not build everything in concrete,” he told a hearing of the Joint Congressional Oversight Committee on the Clean Water Act last week.

“The DPWH project can proceed well as the funds were released. They should start  in a matter of weeks,” Carandang said.

Other projects approved by the Neda board were:

The MRT 3 project involves the acquisition of 52 light rail vehicles.

“There were also various bridge construction projects which were proposed previously by the DPWH. Many of these bridges have to do with the rehabilitation of calamity-stricken areas …. We have approved the acceleration of the timetable for that,” Carandang said.

The two projects whose approval was deferred were the Cavite-Laguna Expressway Project and the acquisition of vessels by the Philippine Coast Guard, especially patrol boats,  he said.

“There is the Cavite-Laguna Expressway project. We need to clarify some details, like how it fits in with the national road integration,” Carandang said.

“There is also the acquisition of the vehicles for the Coast Guard, especially patrol boats. There are technical questions that needed to be addressed before it gets approval,” he added.

Once the technical questions were addressed, the projects could move forward, he said. With a report from Ana G. Roa