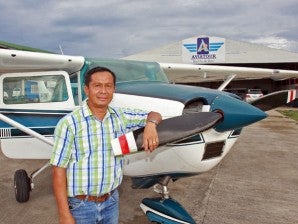 CEBU CITY, Philippines—It was a bittersweet moment for Margarita Bahinting, widow of Captain Jessup Bahinting, when she received a  posthumous Lifesaver’s Award on  behalf of her husband.

“Sweetheart, I’m receiving this award on your behalf and I will continue the good work that you have done. I will continue the mission that we have started as husband and wife,” Margarita said in her remarks after Cebu City Mayor Michael Rama handed the plaque to the Bahinting family Saturday morning.

Rama said the special Lifesaver’s Award was given to the pilot for his selfless effort and dedication to help zoo worker  Ronron Aventurado, who was bitten by a king cobra.

On August 15, Bahinting lent one of his Cesna planes to the city government and asked his Nigerian pilot to pick up four vials of anti-venom serum on Camiguin Island to save the life Aventurado,  whom he had not even met.

Bahinting was chief executive officer and owner of Aviatour Air,  an aviation company that also offers  charter services and aerial tours, maintenance services and aircraft sales. Its flight school was opened in 2006 and was managed by the Bahinting couple.

“It was his timely intervention that saved the life of Ronron. If it were not for Jessup’s plane, Ronron would have been in big trouble,” said Rama.

Aventurado, who delivered a message before the awarding, thanked Bahinting and said he wished he had the a chance to meet his  hero.

Margarita said she did not question God when her husband died in the crash.

“All things work together for the good. God has a reason, a purpose why this happened. Had it not been for this incident, my husband’s love for God would not have been exposed to the world,” said Margarita, who was joined by eldest daughter, Jemar Rose and youngest daughter, Sarah Lynn. Son Dan Bryan, a pilot, is still in the United States.

Cebu City traffic chief Sylvan Jakosalem, a close friend of  Bahinting, said, “Ronron is a testament to Captain Jessup’s goodness. Maybe God said, ‘let us give (Ronron) one more chance (to live) so the world will know’.”

Bahinting’s remains will be brought to his wife’s hometown in Ginatilan, about 135 kilometers southwest of Cebu City, at 7 a.m. on Sunday. He will be buried at 3 p.m. on Monday.