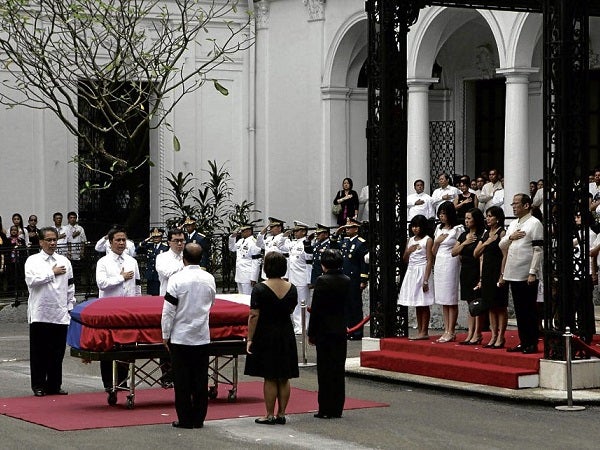 The man felt most comfortable in shorts and rubber slippers. But the funeral rites in his honor were fit for a head of state and would certainly discomfit him.

Interior Secretary Jesse Robredo, who perished with two others in a plane crash in Masbate on Saturday, was accorded full honors on Friday as part of the state funeral ordered by President Aquino.

Earlier that day, Robredo’s colleague in the Kaya Natin! Movement for Good Governance and Ethical Leadership Harvey Keh noted how thousands of people from all walks of life—the urban poor, schoolchildren and government employees—came out in the streets as the hearse bearing his remains drove from the Villamor Air Base to Malacañang.

“It all seemed like Tita Cory’s funeral,” Keh said, referring to the large crowds that lined the streets during the late President Corazon Aquino’s funeral in August 2009.

During the arrival honors, Mr. Aquino, together with Robredo’s widow and daughters Aika, Patricia and Jillian, stood under a covered porch, as eight uniformed pallbearers carried the casket from the hearse while a dirge played in the background.

A state funeral includes arrival, departure and final military honors and the opening of a book of condolence for dignitaries in Manila and in foreign posts. The state pays for all expenses involved for funeral services.

When Robredo’s remains were brought to Malacañang under somber skies on Friday morning for a two-day lying in state, a 19-gun and three-volley salute filled the air.  Confetti rained from the sky from a hovering helicopter as his flag-draped coffin was carried into the American-era Kalayaan Hall.

“We only give this kind of arrival honors to the President, foreign dignitaries, or three-star generals,” Philippine Army spokesperson Maj. Harold Canuboc said after the 15-minute ceremony.

“The (full honors) befit someone like Jesse who had done so much to help his country,” Communication Secretary Ricky Carandang said.

“If there were more people like him in the country, this would be a much better place,” he added.

“This just goes to show how Filipinos love good men; how much Filipinos value integrity, honesty and public service,” he added.

Cabinet secretaries, military and police officials, and Malacañang staff filed into the hall which was decked with wreaths of flowers and festooned with orchids.

Inside the hall, the mood was “somber” and “quiet,” Keh said. “Everyone was praying and paying their respects. The President escorted the family to lunch.”

Memorial services sponsored by the DILG, urban poor groups and the Kaya Natin! Movement followed in the afternoon, with a Mass offered in the early evening. To keep the wake solemn, media coverage was limited to live TV broadcast.

Malacañang organized a state funeral for Robredo and announced national days of mourning from Aug. 21, when Robredo’s body was recovered, until his interment, and ordered all government buildings to lower the national flag to half-staff.

Military honors include elements such as a flag-draped casket, two uniformed personnel standing guard by the casket, a 19-gun salute and a three-volley salute, and taps.

Robredo died with two others after their plane crashed in the waters off Masbate City last Saturday afternoon while flying from Cebu to his hometown Naga City. His police aide survived the crash.

The arrival honors included a composite battalion of honor guards from the Army, Air Force, Navy and General Headquarters, and around 300 policemen and soldiers from all major services waiting at the tarmac.

An AirPhil Express plane carrying Robredo’s relatives and government officials led by Justice Secretary Leila de Lima arrived at the air base from Naga City at around 10 in the morning.

Eight members from the Army’s Security and Escort Battalion—Robredo’s actual pallbearers—boarded the transport plane and carried out his casket.

Robredo’s wife Leni, dressed all in black, followed with General Dellosa as a military band played the somber notes of the 19th century Christian hymn “Nearer, My God, to Thee.”  The Robredo daughters followed close behind.

The casket was then laid in front of the four block formations of honor guards as the six honorary pallbearers approached it. As the men and women in uniform saluted, the band played four Ruffles and Flourishes.

The casket was loaded into a waiting hearse that would take it to Malacañang, as a small crowd—many of them dressed in yellow and some praying the rosary—waited for the convoy to pass outside the air base gate.

Antiriot policemen lined the portion of Andrews Avenue in front of the Ninoy Aquino International Airport Terminal 3.  Along Roxas Boulevard, fire trucks opened their hoses and released water into the air in a “water salute,” the highest honor given by the Bureau of Fire Protection to its firemen and officials during interment.

Usually accompanied by fire truck sirens, the water salute lasts as long as the interment music is being played in the background.

The water salute for Robredo was attended by seven fire trucks from the Pasay Fire Station.  President Corazon Aquino was similarly accorded a water salute.

Thousands braved through the rain and traffic at the Malacañang complex to pay their final respect to Robredo in the limited 4-hour public viewing on Friday. With a report from Jocelyn R. Uy and Gil C. Cabacungan