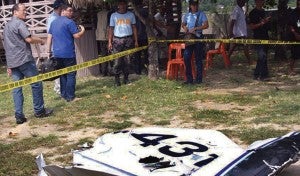 A key piece of emergency equipment on Aviatour Air’s ill-fated four-seat Piper Seneca  would have helped Coast Guard personnel locate the wreckage of the plane of the late Secretary Jesse Robredo   earlier had it not malfunctioned, the government’s initial investigation showed.

In a statement, the Department of Transportation and Communications (DOTC) on Friday said the plane’s emergency location transmitter (ELT) was in the off position, indicating that it failed to activate upon impact when the plane crashed in waters off Masbate last Saturday.

“An ELT is a plane device that automatically activates when a plane encounters emergency landing or any disaster,” the DOTC said.

Transportation Secretary Mar Roxas said had the transmitter functioned properly, Robredo would have been found earlier, although it would not have increased his chances of survival.

Civil Aviation Authority of the Philippines (CAAP) Director General William Hotchkiss III said prior to the Saturday plane accident, the plane’s ELT was functioning well, based on routine inspection records.

The CAAP last checked the plane’s ELT on Nov. 21, 2011, and is valid for operation within a year.

“It is too early to speculate. Our investigating team is still examining the plane wreckage to determine the cause of the accident,” Hotchkiss said.

The Aircraft Accident Investigation and Inquiry Board investigation team was formed by the CAAP this week. The investigation team is comprised of Captain Amado H. Soliman, an aviation industry expert in flight safety for over four decades, Captain Ramon V. Flores and Captain Elmer F. Peña.

The ELT was found on the plane’s wreckage on Wednesday but the right engine of the plane had yet to be recovered. The plane wreckage is now under tight security at Masbate Airport.

“The engine is a key part of our investigation. This will determine if indeed it was due to technical or mechanical problem that caused it to fail,” Hotchkiss said.

Hotchkiss dismissed speculation that diluted aviation fuel was used on the plane and that caused the fatal crash, adding that premature conjectures like this will not help CAAP’s investigation.

The former Air Force pilot said part of the investigation is to check the fuel used in the engine and trace where the plane last refueled prior to its flight from Cebu to Naga City.

He said the investigation board was in the process of reconstructing the flight path of the ill-fated plane, including communication between control towers and the pilot. CAAP also took statements from key witnesses and would issue a subpoena to others who could shed light on the incident.

“It will not be an easy investigation but as directed by Secretary Roxas, we will not leave any stone unturned to find out the real cause of the accident,” Hotchkiss said.

He said the incident had prompted the CAAP to look into the unsafe practices of aviation firms, including flying  planes well past their primes.

Hotchkiss was named CAAP head last June, and is widely expected to clean up the agency, described in the past as having a dearth in competent and honest personnel. With a report from Matikas Santos, INQUIRER.net