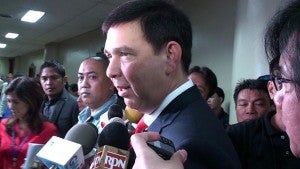 The Senate intends to pass a Malacañang-endorsed measure raising the taxes on tobacco and liquor, the so-called sin taxes, before Christmas.

Senator Ralph Recto, the chairman of the ways and means committee, said the Department of Finance wants to raise P60 billion through a “fair and responsible” method. The money will go to PhilHealth, the state medical insurance program, and “other needs of the health sector,” he said.

The House of Representatives has already passed its version of the sin tax bill that is expected to raise an additional P31 million a year.

Senator Franklin Drilon, the finance committee chairman, believes raising the taxes on these “sin” products would curb, if not discourage, harmful habits that lead to health problems.

Senators from Northern Luzon, however, are worried that the proposed increase in taxes on tobacco products would adversely affect the main source of income of 3 million Filipinos dependent on the produce.

According to Senate President Juan Ponce Enrile of Cagayan province and Senator Ferdinand Marcos Jr. of Ilocos Norte, their main concern is whether Malacañang’s plan to dramatically increase taxes on tobacco and liquor would discourage consumers from buying tobacco products sourced from the north.

Observers have already warned that higher sin taxes could lead to the smuggling of foreign versions of these products to evade the payment of taxes.

Enrile clarified that he does not oppose the plan to use tobacco products to raise money.

Recto noted that liquor and tobacco products are already imposed an “effective tax rate” of 45 to 50 percent.

Tobacco industry players earlier deplored the lopsided sharing of the higher sin taxes in the House version, which provides that an additional P27 billion be collected from taxes on tobacco products but only P4 billion from alcohol products.

Recto said the Senate would hold three more hearings to get inputs from industry players and other stakeholders, including farmers, retailers, workers, academics and consumer groups.

A fourth hearing may be needed on the issue of earmarking the tax proceeds for “worthy national endeavors,” including national health programs, he said.

After another month of plenary debates, Recto sees the Senate passing the bill by November, which would then be followed by bicameral talks to reconcile the Senate and House versions. He sees a consolidated bill being signed into law by December.

Ona pressed the Senate to pass the sin tax bill, saying this would reduce Filipinos’ exposure to these harmful products and add more revenues to government coffers.

“Increasing taxes on alcohol and tobacco products is both a health and revenue issue,” he told the Senate hearing.

“With the passage of this bill, we can sustain the enrollment to PhilHealth of an estimated 10.7 million families belonging to the poorest 40 percent of the population, modernize our hospitals and other health facilities and expand our existing public health programs for health promotion and prevention,” he said.