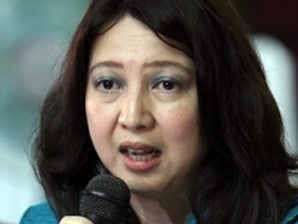 Rains and floods did little to cool the heated debate on the reproductive health (RH) bill.

But with the streets flooded and the capital shuttered down, cyberspace became the battleground.

Critics suggested Tuesday’s drenching and inundation were God’s way of showing displeasure at the population control measure being rushed in Congress.

Representative Mitos Magsaysay, an opponent of the bill, said on Twitter: “Heaven must be crying… we have to undo what has been done.”

Magsaysay referred to the “ayes” that the majority of the lawmakers shouted on Monday to end debate on the RH bill and move it to the next stage of the legislative process, the period of amendments and then vote on the floor.

“Friends sitting on both sides of the RH bill debate, please stop trading barbs against one another and using the weather as an affirmation of your stand,” Inquirer columnist Cathy Babao pleaded on Facebook. “In a time of calamity such as this, we should join forces instead and help in whatever way we can.”

Screenwriter Bibeth Orteza posted Babao’s comment as a reaction to a Facebook post by former entertainment writer Ansel Beluso, in which he said that the continuing bad weather was a “direct message from God.”

“God does not want this foolishness in Congress to continue, which is why He allowed rains and floods to happen. It is so that the RH bill will not be passed,” Beluso posted in Filipino.

Let’s be united to help

“During Milenyo and Ondoy, the RH bill issue was already there. Stop and think about it—the very people whom we want to protect and care for are now the ones who are suffering most from this dreadful rain,” Babao said. “Let’s continue to pray and reach out instead. In times of calamity, be productive, not destructive or divisive.”

The Twitter account of a group called Advocates of Life said: “I wouldn’t be surprised if the flooding in Manila is an expression of God’s wrath over the RH bill.” User @erwinh5 described this as the “dumbest tweet” so far.

According to the weather bureau, the culprit for the worst flood and heaviest rain in the city in the last three years was the enhanced southwest monsoon that merged with the shallow low pressure area.

Fr. Melvin Castro, executive director of the Catholic Bishops’ Conference of the Philippines—Episcopal Commission on Family and Life, called for a truce between the Church and politicians pushing the RH bill as Metro Manila struggles with floods.

“With regard to the unexpected heavy rain and downpour, although we would not wish to give another meaning to it, nonetheless God speaks through his creation as well. Nature tells us to respect the natural course of things. For the meantime let us be united in helping the flood victims,” he said.

Castro said the Church, which planned a mass action at the House of Representatives on Tuesday, would be focusing on helping flood victims.

The desperate scramble to rescue stranded Metro Manila residents points to the government’s lack of right priorities, he said. The Church has long maintained that the country’s burgeoning population is not the problem, but government inaction and corruption.

“This is the real problem of this country, lack of basic public services,” he said.

Writer and lawyer Jemy Gatdula, a prolife advocate, said the reported multi-billion budget for the RH bill should have been used to boost the country’s disaster preparedness.—With a report from Kate Pedroso, Inquirer Research