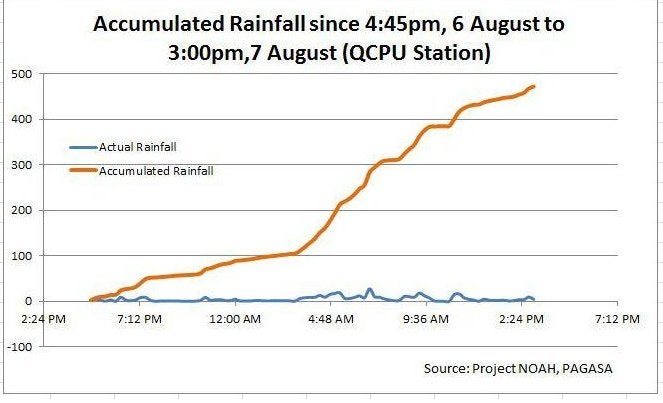 The volume of rainfall that submerged Metro Manila and nearby provinces yesterday surpassed that of Tropical Storm “Ondoy,” initial reports from the government’s Project Noah (Nationwide Operational Assessment of Hazards) showed.

But though the monsoon rains exceeded Ondoy’s rainfall in 2009, the latter still managed to pack more wallop because most of its rainfall came in a shorter period of six hours, said Mahar Lagmay, the project director.

Based on the initial data from Project Noah, there were 472 millimeters of accumulated rainfall from 4:45 p.m. of August 6 to 3:00 p.m. of Auguat 7, a 22-hour period. The data were recorded in Quezon City.

The monsoon rains, on the other hand, were spread throughout a longer period. This is why the data should be put into perspective, Lagmay said.

“That must be put into perspective. Although the accumulated rainfall was initially more than Ondoy, the amount from Ondoy was compressed in a shorter period, within six hours. It was concentrated during that period, making Ondoy much more intense in terms of rainfall,” Lagmay told the Inquirer in a phone interview.

He added that the data had to be verified by the Philippine Atmospheric, Geophysical and Astronomical Services Administration (Pagasa).

The monsoon rains gave Metro Manila and nearby provinces a near repeat of Ondoy, with many people trapped in their homes because of raging waters and cars stalled in deep floods.

What was different was that there was not even any storm or typhoon to blame for the deluge, just the nameless southwest monsoon.

Pagasa said the southwest monsoon brought heavy rains because it had the lingering effects of Typhoon “Gener” and was enhanced by Tropical Storm “Haikui.” The tropical storm was spotted northeast of Taiwan but was outside the Philippine area of responsibility.

Weather forecaster Glaiza Escullar said Gener had enhanced the southwest monsoon when it was in the country last week.

Before the effects of Gener could wane, Haikui came close to the country and enhanced the monsoon or moisture-laden winds again, thereby causing heavy rains.

Escullar likened the situation to a wet rag that was drenched in water. Before the rag could be wrung out, it was doused in water again.

As Haikui moved closer to Taiwan, its effect on the southwest monsoon in the country intensified. The peak of the monsoon rains enhanced by Haikui was felt Monday night and Tuesday morning, Escullar said.

Moderate to heavy rains were also felt throughout most of Tuesday and the same may be felt on Wednesday, although it may also start easing up a bit on Wednesday.

Landslides and flash floods in mountainous and low-lying areas may occur, Pagasa said.

If no new typhoon, low pressure area or any other weather system would enter the picture, sunnier weather would be felt on Thursday.

Pagasa said data from Project Noah, which is under the Department of Science and Technology, was still subject for verification.

Forecaster Mario Palafox said data from Project Noah came from automatic weather stations and would have to be verified by checking the manual rain gauges of the weather bureau.

“That is subject for verification. The automatic weather station can be susceptible to errors. It may be correct, or the machine could have problems,” Palafox said.

Palafox said the monsoon rains were different from Ondoy’s because the downpour on Tuesday was spread out more uniformly throughout the day.

He also described the monsoon rains as “abnormal” given their heavy volume. There was no storm, typhoon, or even a low pressure area in the country.

“It’s been a long time since we last experienced this kind of rainfall event,” he said.

Palafox also said the rains came intermittently and did not fall down in a single time period because they were caused by the southwest monsoon. These are winds that move around.—With Frances Mangosing, INQUIRER.net