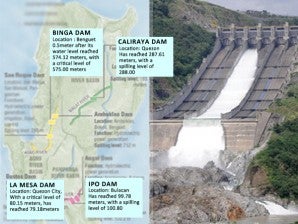 MANILA, Philippines – Four dams in Luzon opened their gates Sunday to prevent water levels from breaching their full capacity and to avert possible damage on the facilities.

An alarm has been raised for residents in at least 10 municipalities, including San Manuel, San Nicolas, Tayug, Sta. Maria, Asingan,Villasis, Alcala, Bautista, Rosales and Bayambang, in Pangasinan province which may be submerged in floods as an effect of water released from the San Roque Dam.

Pagasa hydrologist Nivagine Nievares said that by 12 noon Sunday, the Ambuklao Dam in Benguet opened two gates by one meter after the water levels reached 750.65 meters close to its normal water level of 752 meters.

The Binga Dam in Ifugao, Benguet opened three gates by three meters after water levels reached 573.56 meters. The normal water level at the dam is 575 meters.

The San Roque Dam in Pangasinan, which catches most of the water from the Ambuklao and Binga Dams, opened two gates by 1.5 meters after the water levels breached its normal holding capacity level of 280 meters and by noon Sunday was measured at 284.09 meters.

Nievares said that the Ipo Dam in Bulacan opened at around 5:30 a.m., Sunday, its gate by 67.80 centimeters for the preemptive release of water. Water levels at the dam reached