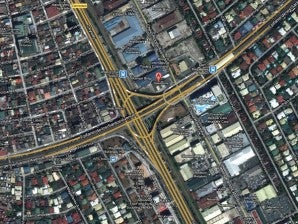 MANILA, Philippines—A call center agent was killed when the motorcycle he was riding was rear-ended and dragged by a speeding passenger bus along the Magallanes Interchange in Makati City early Sunday, police said.

Police said the fatality Marvin Apura, 27, of Villamor Airbase, Pasay City, died immediately after the accident while his wife, Myra Apura, who was riding with him, suffered minor injuries.

Senior Police Officer 1 Rolando Olanda, investigator on case, said the driver, conductor, and even the passengers of the northbound Don Mariano bus (TVX-515) were nowhere to be found right after the accident that took place around 7 a.m. on Sunday.

The wife was in a state of shock when traffic investigators arrived at the scene, Olanda said.

Initial investigation showed that a speeding bus coming from the Osmeña Highway hit a motorcycle on the Magallanes Interchange.

The motorcycle rider and his wife were thrown off by the impact as the bus dragged the motorbike under it at least three meters farther before it stopped.

“Unfortunately the man, when he fell from his bike, was run over by the bus,” he said.

Injuries in the head and his upper body led to his immediate death, Olanda said.

The Makati police are preparing to file appropriate charges against the bus driver identified as Nemecio Magan, 32, a resident of Baclaran, Parañaque City, who remained at large as of Sunday noon.