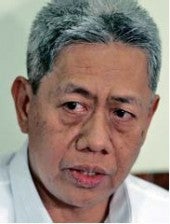 The National Bureau of Investigation (NBI)  has  found probable cause to indict 40 people, including the head of the Bureau of Customs intelligence group of conspiracy to commit fraud in the notorious case involving some 2,000 container vans containing presumably smuggled cargo that disappeared in February 2011.

The new NBI director, Nonnatus Caesar Rojas, in a report submitted to the Ombudsman in early May, showed how Bureau of Customs (BOC) personnel and private brokers allegedly connived to defraud the government of taxes for the missing 2,000 container vans that were loaded with rice and sugar.

“The Bureau of Custom officials and employees as well as private individuals involved… conspiracy among and between them is clearly established which caused undue damage and prejudice to the government,” the NBI said in its recommendations in the report, a copy of which was obtained by the Philippine Daily Inquirer.

The NBI investigation stemmed from a hearing conducted by the House ways and means committee last year on the reported disappearance of the 2,000 or so container vans which happened during the incumbency of former Customs chief Angelito Alvarez.

Rojas, who was recently appointed permanent director of the NBI, said the investigation was conducted and completed before he was appointed officer in charge, but that he supported it.

The NBI investigation, conducted under the supervision of agent Madrino A. de Jesus, also recommended the filing of criminal charges against the owners and staff of Sea Eagle Trading, one of the companies under which the vans were registered; and two forwarding companies—Zoom Cargo Base Forwarders and ATA Cargo Line Interfreight Services.

The investigation showed that the cargo did not reach their destination, the Port of Batangas, but were unloaded at various warehouses along C-3 Road in Caloocan, Tondo and Navotas.