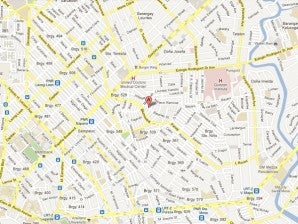 MANILA, Philippines–A heavily-tattooed man, one of three persons who reportedly robbed two commuters of their valuables, was killed early Tuesday in an alleged shootout with patrolling policemen in Sta. Cruz, Manila.

The slain man, believed to be a member of the Commando Gang, allegedly shot it out with members of the Manila Police District Sta.Cruz anti-crime unit while his two alleged cohorts escaped.

The fatality was described to be between 25 and 30 years old, five-foot-five inches tall, of regular build and had tattoos all over his chest and arms.

SPO2 Edmundo Cabal of the MPD homicide section said the policemen were on routine patrol along Rizal Avenue early Tuesday when two persons flagged them down at the corner of Tayuman and Apitong Streets at around 2 a.m.

Cabal revealed that Princess Garcia and her companion Adreni Serame told the police they were waiting for a ride home when they were held up at the corner of Rizal Avenue and Tayuman Street by three armed men who took a pouch bag containing a mobile phone and P1,700 cash, as well as a pair of silver earrings.

Four policemen from the Sta. Cruz station immediately conducted pursuit operations and caught up with a man, whom the victims pointed out as one of the robbers.

But just as the policemen were about to accost the suspect, he drew a .38 cal. revolver and fired at the law enforcers, prompting them to retaliate which resulted in the man’s death.