Delfin Lee is no Ping Lacson–Binay 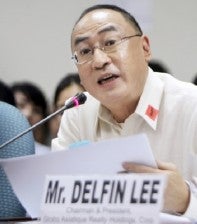 Binay, in a statement, said that he was issuing the call after Willie Rivera, Lee’s counsel, said in a television program that Lee was still in the Philippines but was in hiding. Rivera also likened the case of Lee to Lacson, who he said went into hiding during President Gloria Macapagal Arroyo’s administration.

“Delfin Lee is no Ping Lacson. Senator Lacson was a critic of the Arroyo regime, while Lee defrauded the Pag-Ibig Fund of almost P6 billion by using fake borrowers and fake documents and destroyed the dreams of thousands of working Filipinos,” Binay said.

“I am appealing to the PNP and NBI to double their efforts to locate and arrest Delfin Lee. Now that we know that he is still in the country, he must be found and put behind bars at the soonest,” Binay added.

Lee, his son Dexter, and three other Global Asiatique (GA) officers had standing warrants of arrest against them for syndicated estafa in connection with GA’s Xevera housing project in Mabalacat, Pampanga.

On May 22, Judge Maria Amifaith Fider-Reyes of the Pampanga RTC found probable cause against Lee and his co-accused and issued corresponding warrants for their arrest with no recommendation for bail.

Binay also debunked Rivera’s claim that there was no syndicated estafa against Lee’s company, Globe Asiatique. Rivera, in his explanation, cited the January 30, 2012 resolution of the Makati Regional Trial Court (RTC) that ordered the Home Development Mutual Fund (HDMF or Pag-Ibig Fund) to comply with the contract provisions on replacement buyers.

Binay said the Makati case ruling did not absolve Lee from criminal liability.

“GA is just muddling the issue. The Makati RTC ruling does not absolve Lee of syndicated estafa,” Binay said.

Binay, in his defense, cited the Court of Appeals (CA) April 16, 2012 decision penned by Associate Justice Franchito Diamante. He said the said decision ruled that regardless of the final ruling on the Makati civil case, it would not serve to extinguish the criminal liability of Lee and his co-accused.

The statement also noted that for her part, Pag-Ibig President and CEO Darlene Berberabe said the Makati civil case was “separate and distinct” from the criminal case filed against Lee, his son Dexter, and three other GA officers for syndicated estafa.

“The Makati RTC decision expressly states that it did not delve into the issue of fraud (pertaining to Pag-Ibig ghost borrowers and double sale),” she said.

Berberabe said the Makati court ruling was not yet final and was the subject of a motion for reconsideration filed by Pag-Ibig.

“Pag-Ibig respectfully disagrees with the decision and thus we filed a motion for reconsideration. We are confident that the decision will be subsequently overturned,” she said.

Berberabe said Pag-Ibig refused to accept the replacement buyers because doing so would mean covering up the fraud committed by GA.