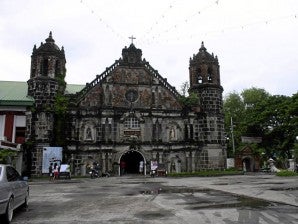 A WALL in the convent of the Sta. Monica parish in Minalin, Pampanga, features a deteriorating mural depicting the town’s past. PHOTO BY TONETTE OREJAS

MINALIN, Pampanga – THE TOWN of Minalin in Pampanga is turning 400 years old in 2014 (based on the year of its separation from Macabebe town in 1614), but a mural almost its age, probably one of the oldest in the Philippines, is crumbling.

Bearing the date 1619 and painted on one of the walls of the convent of Sta. Monica Church, the mural shows the flora and fauna of the town that time, says Fr. Greg Vega, the town’s parish priest. The mural measures 89 inches wide and 113 inches tall.

Fr. Mark Manabat, former parish priest, calls the mural a “one in a million piece” because “it appears like a map of old Minalin.”

Made of argamasa (an old cement mixture made of lime mortar, egg whites with fine aggregates of river sand), the mural froze in time a “prehistoric landscape of riverine communities, marshes and swamps with birds, agricultural land with damulag (carabao) and a farmer at the background,” says Joel Pabustan Mallari, a researcher working with the Holy Angel University’s Center for Kapampangan Studies (CKS) in Angeles City.

He says the matter of the date, 1619, has yet to be settled—whether this was the year when the mural was made or if this was a founding date of the pueblo itself. A gap of only five years is in between those questions.

Manabat says a team from the National Commission for Culture and the Arts (NCCA) restored the mural and two other paintings at the rectory before 2001.

The mural’s present condition leaves much to be desired. Restoration expertise or funds are not available in the town.

“The restoration exposed the adobe and bricks on which the mural was drawn. Salt-like powder appears through the cracks. There’s moisture,” Manabat tells the Inquirer.

The life of the mural and its relevance could be best seen in relation to the church.

For a start, there are no records when this Augustinian church was built and by whom. A record says it was finished in 1834.

Other Augustinian churches in Pampanga, while they began to be built half or full century after the Spanish conquest in 1571, are not adorned with a non-religious mural such as that of Minalin’s.

The Minalin church, among 20 original Augustinian missions, is the only one that bears corbels showing pre-Hispanic culture.

“Motifs that were carved include the ornamental heads of bulig (mudfish), naga (dragon) and dapu (crocodile) which are said to be sacramental figures of old Kapampangan belief system. These are comparable to the Muslim torogan of Mindanao,” Mallari says. “The spires decorating the bell towers depict a Moorish architecture, hinting of the old Islamic faith of early Minaleños.”

Mallari found accounts that the ceiling was renovated in 1939 and that mural paintings on it were removed as well.

Manabat recalls that Msgr. Pablo Diaz led the restoration of the church in 1982 while Fr. Rolando Lopez guided the renovation of the convent in 1998.

Manabat says he decided to save the church and convent from floods by filling the grounds with sand and covering these with concrete in 2002.

The mural, he says, was left untouched during any of those stages except before 2001. But it is now badly in need of immediate help because bits of it are falling, Vega says.

Mayor Arturo Naguit says that at his request, a team from the National Museum is visiting the town on July 18 to discuss heritage concerns, including the mural, in the run-up to Minalin’s quadricentennial celebration.

The mural, Mallari says, speaks of Minalin’s past, which matters not only to the beginnings of Pampanga but to what was once a large Kapampangan region.

The story begins with Pansomun who, in his will, described himself to be a cousin of Rajah Soliman and Lakandula, the chieftains of Manila and Tondo at the time of the 1571 conquest by Spain.

Pansomun is also the grandson of Prince Balagtas, ruler of the Kapampangan empire that spans almost the entirety of Luzon.

Forty three years later, in 1614, Minalin separated from Macabebe, which is at the mouth of the Pampanga River.

Pansomun, who took the name Fernando Malang Balagtas when converted to Christianity, left a will in 1589 that defined the vast Kapampangan territory. In that will, Pansomun/Balagtas said he was born in Tabungao, the old name of Sta. Maria, the old location of Minalin.

In modern times, Minalin took a U-shape, with Sta. Maria in the south and the poblacion (town center) in the north. In between the space are Sto. Tomas, San Simon, San Luis and Apalit towns.

The church, elders say, was built on its present site, which is now the poblacion, because that was where the lumber flowed during a massive flooding.

The church’s original arc remains in Sta. Maria and this, too, needs to be preserved, Vega says.