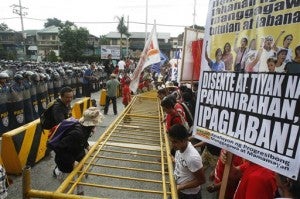 Protesters remove the barricade put up by riot police as they attempt to march closer to the Philippine Congress to protest the third State of the Nation Address of President Aquino on Monday, July 23, 2012, in Quezon city, northeast of Manila. AP PHOTO/BULLIT MARQUEZ

“All public assemblies and mass activities held today in different parts of Metro Manila and some key cities of the country were generally peaceful,” PNP spokesman Generoso Cerbo Jr said in a statement.

Cerbo said this was also the “overall assessment” of PNP Chief Director General Nicanor Bartolome despite the protests staged by cause-oriented groups and militant organizations, which resulted in a clash with law enforcers.

The spokesman said, quoting Bartolome, that except for that “brief confrontation” between militant groups and the police security contingent along Commonwealth Avenue and the mass action staged by an estimated 5,380 participants, the overall situation remained “orderly and peaceful.”

The police did not comment on the afternoon incident wherein militants removed the steel barriers between eastbound and westbound lane.

Meanwhile, no other significant incidents were reported from the different regions of the country aside from pockets of mass actions in some cities of the Visayas and Mindanao, the PNP said.

Smaller mass actions were also monitored in the cities of Cebu, Davao, Butuan, Masbate and Santiago in Isabela.

The militants who stayed near Batasang Pambansa dispersed before 6 p.m. Members of Metro Manila Development Authority immediately cleared the streets of the trash left behind by the protesters.

The eastbound lane of Commonwealth is now open to traffic.