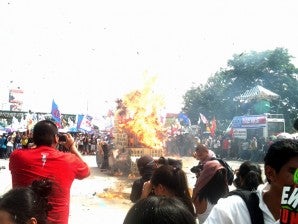 MANILA, Philippines—Protesters burned Monday afternoon an effigy of President Benigno Aquino III on Commonwealth Avenue in Quezon City that portrayed a two-faced character – one that was charming and the other, menacing.

Coinciding with Aquino’s third State of the Nation Address, protesters torched a 14-foot tall effigy sitting on a bulldozer around 2:15 p.m.

“Having two faces mean being deceptive. That is what this [administration] has excelled in the past two years,” said Crisanto de Leon, chairman of artist collective UGATLahi.

Bayan said the right side of the effigy presented Aquino as a “charming suitor” in his signature yellow shirt, with a bouquet of flowers in his right hand with abbreviations PPP (Public-Private Partnership) and CCT (Conditional Cash Transfer).

The other side of the effigy showed “hideous scars and rotten face.”

In the backdrop, a US spy plane was suspended over the effigy’s shoulder. The left hand held an instrument of torture.

“These symbols are a critique of increased US military intervention and unmitigated rise in human rights violations. The number of extrajudicial killings under Aquino’s watch surpassed its hundredth count just recently,” rights group Karapatan said.

On claims of economic growth by Aquino, Bayan said the gains were achieved “at the expense of the exploited poor.”

“While mining and housing projects have proved profitable for the private sector, the masses have only seen demolished homes, loss of livelihood and an unbearably grim future,” de Leon added.