Protesters remove steel barricade near Ever Gotesco in Quezon City 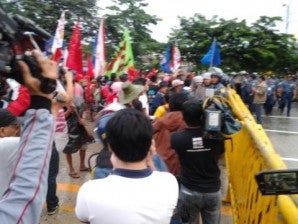 MANILA, Philippines—Protesters forcibly removed the steel barricade of the Philippine National Police near Ever Gotesco early Monday afternoon where cops lined up to block protesters from going beyond the area, police said.

Superintendent Marcelito Pedrozo said protesters, led by Bagong Alyansang Makabayan (Bayan), removed the police barricade as they insisted that their rally permit application filed last July 10 was “deemed approved” following the alleged failure of Quezon City’s local government to act upon their request to stage a rally right outside Batasang Pambansa, where President Benigno Aquino III will deliver his third State of the Nation Address, or Sona, on Monday at 4 p.m.

“We cannot count on that [statement] as we didn’t receive a copy of an approved rally permit from the Quezon City government, Pedrozo said, adding that they allowed the barricades from being removed to avoid further tension with militant groups.

Nonetheless, protesters will “not in any way” be allowed to breach the security line some 3 kilometers from Batasang Pambansa, Pedrozo said.

Bayan secretary general Renato Reyes told INQUIRER.net that their lawyer, Terry Ridon, tried to speak with the police negotiator to impose their right to hold their protest program outside Batasang Pambansa due to the inaction of the city local government on the request two days after their filling, which he claimed was tantamount to the automatic grant of a permit.

“Dumaaan kami sa tamang proceso for application for rally permit. Sila, hindi nila sinunod ’yong batas (We went through the right process of applying for a rally permit, but they did not follow the law),” Reyes said, referring to Batas Pambansa 880.

Ridon said they would file the necessary criminal charges against Quezon City Mayor Herbert Bautista “for his inaction,” as well as against Pedrozo and other police officials who blocked their client’s group from passing through.

“Wala sa aming nasaktan pero ang masakit doon, lantarang nilalabag ’yong karapatan mo kahit walang legal basis (No one among us was hurt, but what is painful is they openly violated our right without any legal basis),” Reyes said, adding that PNP should be looking for Retired (Majlor) General Jovito Palparan, “not blocking protesters.” Palparan, who remains a fugitive, is wanted in connection with the abduction of two University of the Philippines students.