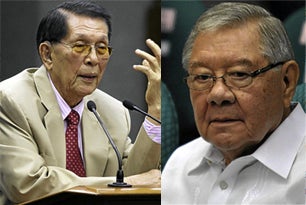 MANILA, Philippines—Sessions in both houses of the 15th Congress opened Monday morning, prior to President Benigno Aquino III’s third State of the Nation Address, which is scheduled to be delivered at 4 p.m.

Both leaders of the two chambers of Congress, Speaker Feliciano Belmonte Jr. and Senate President Juan Ponce Enrile, convened their members and started the third regular sessions at 10 a.m. in their respective session halls.

Belmonte said they were resuming work with “renewed vigor and a sense of urgency… to propel our country to higher growth.”

He added the second regular session was closed “on a high note” having enacted various important bills.

Former President and now Pampanga Representative Gloria Macapagal-Arroyo was unable to attend the opening of the third regular session.

She attended the opening of the second regular session but has been a no-show at Aquino’s first and second Sonas.

She has been under hospital arrest at the Veterans Memorial Medical Center since last year for charges of electoral sabotage.

At the Senate, its president, Juan Ponce Enrile, opened the third regular session at exactly 10 a.m., slamming the door on the possibility of extending the terms of elected officials in the renewed drive to amend the Constitution.

The session adjourned 45 minutes later after Enrile delivered his speech.

In his speech, Enrile said that Charter amendments might become a major issue in the upper chamber, but maintained that changes would be limited to economic provisions.

“But, let me be very clear about this. We will agree to such a move to amend the Constitution, but only with respect to the economic provisions of the present Charter,” he said.

“House Speaker Feliciano ‘Sonny’ Belmonte and I do not seek to revise the Constitution. Rather, we seek to amend only certain economic provisions therein such that there will be more flexibility in the ownership of certain industries, particularly those that are involved in the exploration, development and utilization of our natural resources.”

Later, in an interview, Enrile ruled out the possibility of amending other constitutional provisions such as one that would lift the term limits of certain government officials.

“It will not happen because the two Houses agreed and we will pass the resolution. You will see whether we are going to tinker with other provisions of the Constitution,” he said.

Enrile insisted that only he and Belmonte were pushing for the amendments. He said he has not discussed the matter with his colleagues at the Senate.

“I have to discuss it with them. I cannot assume their concurrence but I will explain the thrust of our proposal,” he told reporters.

Enrile’s speech laid down the chamber’s legislative agenda, one that would focus on helping spur the economy partly by improving the existing business climate.

“The improvement of the economy is a government’s vital concern. But our way of allowing business to prosper must be guided, not only by a sense of free enterprise, but also by the spirit of stewardship,” he said.—With Christian V. Esguerra, Philippine Daily Inquirer