What the nation wants to hear 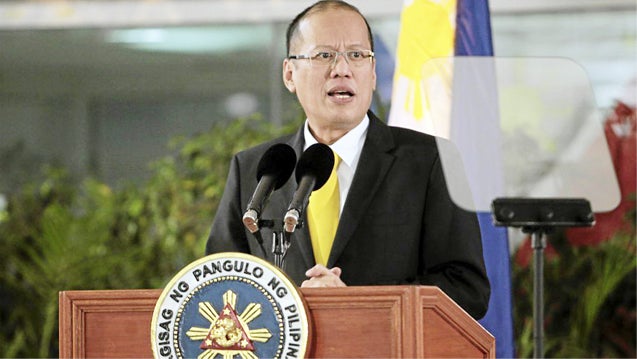 MANILA, Philippines — President Benigno Aquino III will face the nation this Monday to report what he and his administration have done over the past year and what he intends to do next.

Malacañang claimed that “most of what the President mentioned last year has come into fruition.”

And in a run-up to his third State of the Nation Address (SONA), Aquino over the past weeks has provided a glimpse of what he is hoping to achieve and of what he has accomplished.

The President noted the country’s 6.4 percent economic growth “surpassed the expectations of most, if not all, analysts”.

“More importantly, this growth has been felt broadly through the economy, and not just by a select few,” he said.

The President also cited successes against unemployment and hunger, in the delivery of social services, infrastructure, tourism, and in the impeachment and conviction of then Supreme Court Chief Justice Renato Corona.

“We expect to be self-sufficient in rice by next year, if not, be the exporter of rice by next year,” Aquino said during the “7th North American Ambassadors, Consuls-General and Tourism Directors Tour” held in Manila last July 13.

“We inherited a classroom shortage of 66,000 classrooms which we expect to complete, finishing the backlog, by next year, at the latest by December, hopefully by June, to include the 64,000 teachers that will teach these classrooms,” he added.

By 2015, the President said he hoped to inaugurate the highway connecting the North Luzon and South Luzon Expressways, which would reduce the travel time from Clark, Pampanga, to Calamba, Laguna, by about an hour and 15 minutes.

“There is a proposal also for a new nautical highway which will bring down travel time from Luzon to Mindanao using the nautical highway from the current three days to 15 hours,” Aquino said.

INQUIRER.net ran a five-part series on some of the issues the President promised to act on in his last Sona to find out what his administration has done to address them.

These focused on the P1 billion worth of coffee spent by the previous administration of the Philippine Amusement and Gaming Corporation (Pagcor), which the President himself exposed in a previous congressional speech, the appointment of retired Supreme Court Associate Justice Conchita Carpio-Morales as the Ombudsman, reforms being undertaken in the Autonomous Region in Muslim Mindanao (ARMM), the status of the government’s conditional cash transfer program and on human rights issues that included the proposed compensation for victims under martial law.

But even before the coffee issue could cool down, the P8.2 million purchase of bottled water by Pagcor boiled over, which Naguiat and the Palace had dismissed as an “isolated case” but an old “practice”.

Aquino’s appointment of a new Ombudsman in the person of Morales and of former Anak Mindanao Representative Mujiv Hataman as acting governor of ARMM were expected to beef up the President’s fight against graft and corruption.

Morales did not disappoint him for as soon as she assumed office, graft charges were filed against former President and now Pampanga Representative Gloria Macapagal-Arroyo.

“Well, certainly Mrs. Arroyo is considered a big fish but, corruption does not end there,” presidential spokesperson Edwin Lacierda said.

Hataman has been instituting reforms in the ARMM where massive fraud in the 2007 elections has earned it the tag as the “cheating capital” of the Philippines.

Lacierda’s alter ego, Abigail Valte, tried to be more upbeat about the President’s accomplishments over the past year.

“The other, I think, most of you are interested in are the pieces of legislation that the President mentioned last year. We have tracked most–all of them and the ones that have not been passed yet into law (but) are now in advanced stages of legislation,” Valte said during last week’s press briefing in Malacañang.

Valte said the House of Representatives approved 10 to 12 bills, including the passage of the Whistleblowers’ Act and the ‘lifeline” bill, which extends the lifeline rate for electricity consumers for 20 years.

The other bills Valte enumerated were those on higher pay, better working condition and other benefits for household workers; a measure that would improve the system that awards pensions to retired soldiers; expansion of the scope of scholarships for outstanding yet underprivileged students; advancement of universal quality healthcare; responsible management of the environment; and the formation of facilities that will ensure the safety of citizens during times of great need and calamity.

What Valte failed to mention, however, was the non-passage of a bill that would have provided compensation to martial law victims, which has continued to disappoint many of the victims including Human Rights Commissioner Loretta Anne Rosales. Rosales spoke about this matter in an interview with INQUIRER.net.

Valte also failed to mention that legislation on reform measures on “sin taxes” and on Freedom of Information remain pending in Congress.

The Palace has also remained mum on allegations by the US State Department and US-based watchdog Human Rights Watch that rights abuses under the Aquino administration were still being committed with “impunity”.

Rosales has expressed frustration over the government’s failure to arrest retired General Jovito Palparan, who has been linked to various cases of rights abuses, the last of which was the alleged kidnapping of two students from the University of the Philippines in 2006.

While the government’s conditional cash transfer program is on target, according to Social Welfare Secretary Corazon “Dinky” Soliman, poverty will continue to be a problem even after Aquino steps down as president in 2016.

Whether Aquino will update the country on these issues in his Sona later on Monday remains to be seen but lawmakers are expecting to hear more.

Led by Senate President Juan Ponce Enrile, legislators want to know about Aquino’s economic direction, his take on security, the Scarborough Shoal standoff and the country’s relations with China, and Charter change.

“I hope he will touch on the economic direction of his administration and the problem of security,” Senate President Juan Ponce-Enrile said during last week’s regular forum in the Senate.

Enrile though warned the President against mentioning the conflict between the Philippines and China over the disputed Scarborough Shoal.

“If I were the President, I wouldn’t touch it in my SONA. That’s a sensitive national security problem,” he said.

“It’s better to not to talk about it. Don’t talk about a problem that your enemy has an interest on…” the Senate leader added.

But Senator Ramon Revilla Jr. wants just the opposite: “I am hoping the President will discuss his plans and policy on how to proceed with our relations with China.”

“He [Aquino] has to be clear on our stand and have concrete plans of action that will address the impending problems involving trade, tourism and national security. This will have a great impact not only on our national territory, but also on our economic relations with China, it being our third largest trading partner.”

Revilla said the President should also discuss how the government would address the power shortage in the county and was expecting him to make another push for the passage of priority legislation like the sin taxes bill and the Freedom of Information Act.

The President should likewise make a clear stand, the senator said, on Charter change, which is now being pushed by leaders of Congress.

“We are hearing about a renewed push for Charter change. I hope the President puts this speculation to rest either way,” Revilla said.

“Of course for sure, he will mention judicial reform following the conviction of the chief justice and it’s a first in Philippine history…” said Lacson, one of 20 senators, who found Corona guilty for his failure to disclose to the public his Statement of Assets, Liabilities and Net worth (SALN). Only three senators–Joker Arroyo, Miriam Defensor-Santiago and Ferdinand “Bong-Bong” Marcos Jr. –voted to acquit Corona.

The selection process that will determine who the next Chief Justice is is now ongoing, with the Judicial and Bar Council set to start the interview sessions with the candidates this week.