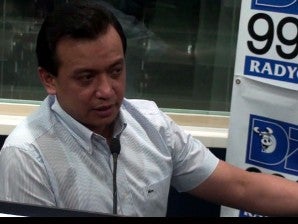 In an interview with Radyo Inquirer 990AM, Trillanes said that although he won’t be physically present at Aquino’s third SONA at the House of Representatives in Quezon City, he would listen to the President’s address on television.

Trillanes explained that he preferred to watch the annual affair on TV to being at the SONA venue because of the many “distractions” inside the House plenary hall.

Besides, Trillanes said the plenary hall is not the best place to listen to the speech, adding that and if there will be a power point presentation, he won’t be able to see it quite clearly.

He added that based on his experience last year, there was a shortage of seats, with even those reserved for the senators being taken by gate-crashers.

He said his decision not to attend the SONA is a personal choice and that the President is still assured of his support.