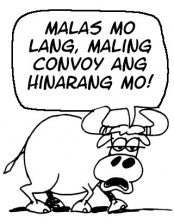 In an ironic twist, a Quezon City traffic policeman has become a casualty of President Aquino’s “no wangwang” (no siren) policy.

Senior Police Officer 2 Ricardo Pascua was relieved of his duties pending an investigation for not giving way to the presidential convoy as it was passing along Commonwealth Avenue Tuesday morning.

Mr. Aquino was on his way to La Mesa Dam to inaugurate a water improvement project of the Metropolitan Waterworks and Sewerage System (MWSS).

“I didn’t know the President was coming. Wala kasing wangwang (Because there was no siren),” Pascua told reporters in explaining why he did not yield to the oncoming convoy. He asked for the President’s forgiveness.

As a result of the incident, Pascua has been relieved of his post, according to Chief Superintendent Mario de la Vega, head of the Quezon City Police District.

The President set down a “no wangwang” policy after he took office two years ago, regarding the use of sirens as a symbol of arrogance and abuse by those in positions of power.

“I am asking for forgiveness. I did not see the President was coming,” an obviously repentant Pascua, who has been ordered confined to Camp Karingal while the probe is going on, said in Filipino. “I had no ill intention or bad motive.”

The chief of the Presidential Security Group (PSG), Brigadier General Ramon Mateo Dizon, said the incident happened at 9:35 a.m. and that Pascua’s vehicle was about two cars away from that of the President.

He said it was up to the Philippine National Police to determine what administrative violation Pascua had committed.

Dizon said that in the military, what the policeman did would be a “gross disrespect to the Commander in Chief.”

Pascua, assigned at the Novaliches station, said he was driving along Commonwealth when one of the President’s motorcycle escorts—dubbed a “motorcycle sweeper”—signaled to him to stop on the corner of IBP Road and Commonwealth.

“I wasn’t doing anything wrong and I was surprised why I was being asked to move aside,” Pascua said. He said the sweeper then told him he was blocking the presidential convoy.

He said that at that point, he introduced himself as a policeman. He said he was then brought to the Batasan Hills Police station for a verification of his credentials.

De la Vega was not impressed.

“All policemen are aware of the protocol when it comes to very important persons,” De la Vega said. He said he had received a call from the PSG about the incident.

De la Vega said that Pascua, in civilian clothes, was driving a Mitsubishi Adventure (ZJK-679) when the presidential convoy came and that he continued to drive even after the motorcycle escort had blocked the  path of motorists to allow the convoy through.

“Instead of stopping and yielding to the convoy, Pascua continued to drive past the motorcycle sweeper,” De la Vega said, adding the policeman refused to get out of the way even after being repeatedly cautioned by the sweeper.

“He should have given way,” De la Vega said.

A report obtained by the Philippine Daily Inquirer said an unidentified motorcycle escort even fell off his motorcycle after he lost his balance trying to stop Pascua. The report said Pascua’s vehicle was sporting a QCPD plate with its rear plate number covered with tinted plastic.

In Malacañang, presidential spokesperson Edwin Lacierda said that Pascua was “quite arrogant” and showed his badge when motorcycle cops stopped him, and that he insisted on turning left on the road to make a U-turn as Mr. Aquino’s convoy was heading straight toward Fairview.

“We leave the administrative supervision of that policeman to the QC police department,” Lacierda said.

Dizon said the convoy was occupying three of nine lanes and that it seemed Pascua was “oblivious” of the convoy despite the car blinkers and all.

A staff from the QCPD radio room told the Inquirer that “code 99”—or radio silence—is observed every time the President is on the road.

“No other transmission is allowed while the President is mobile,” said a policeman, asking not to be identified because he had no authority to speak about the incident. “It’s lifted only as soon as the President arrives at his destination or he has passed the city boundary.”