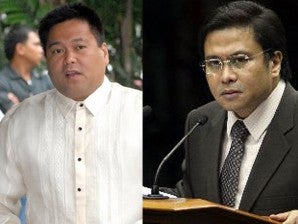 It would seem the sibling rivalry in the multifamily household of deposed President and convicted plunderer Joseph Estrada is being played out in the early positioning for the 2013 elections.

Senator Jose “Jinggoy” Estrada on Tuesday shot down the idea of a “super coalition” between the administration Liberal Party and the United Nationalist Alliance (UNA) famously proposed by his half-brother, San Juan Representative Jose Victor Ejercito.

“It is highly impossible. Think about the check and balance in case only one ticket wins. The Senate would lose its credibility in acting as a fiscalizer,” said Jinggoy, the Senate president pro tempore who is the deposed President’s son by his wife, Loi.

Ejercito, Estrada’s son by San Juan Mayor Guia Gomez, floated the idea of a single senatorial ticket that would include LP and UNA candidates for the 2013 elections.

His argument was that since there was uncommon amity between the Aquino administration and the opposition, it would be “ideal” to simply create a super coalition between the LP and UNA.

The proposal was rebuffed by Malacañang and LP leaders.

Jinggoy insisted that there were no ongoing “backroom talks” between the ruling LP and UNA, the coalesced parties of his father’s Partido ng Masang Pilipino (PMP) and Vice President Jejomar Binay.

However, the elder Estrada on Tuesday appeared to come down on the side of Ejercito, making a pitch for the  latter’s “super coalition” which he said would save senatorial candidates a lot of money.

“This is just a proposal, an idea for the good of the country, not for anything else. It’s not a sign of weakness,” Estrada said.

But if the invitation is not accepted by the LP, Estrada said the UNA, already a big coalition by itself, would  “fight it out” with the administration ticket.

Estrada said the alliance could also be limited to the midterm elections. “Right after the elections, we could go our separate ways. We could go back to our respective parties,” he said in Filipino.

Sources said UNA leaders were shocked at the Ejercito proposal.

“Vice President (Jejomar) Binay found himself in a very awkward position after Ejercito’s announcement of a super coalition. But since the congressman is an ally, Binay has no choice but to support the position,” an UNA source disclosed.

“The statement came as a surprise since the congressman had no authority to speak about that. The idea is just like the Binay-Jinggoy tandem being floated last week. There is absolutely no basis,” the source added.

Other senators from both the opposition and administration sides also sounded pessimistic over the super coalition idea.

Senator Franklin Drilon (LP) cited the awkwardness of a senatorial candidate straddling or supporting both administration and opposition platforms during election time.

Senator Francis Pangilinan, another LP leader, said whoever is behind the super coalition proposal must remember not to include an opposition candidate who is vocal about his criticism  of President Benigno Aquino’s programs.

Senator Ferdinand Marcos Jr. noted that with the number of aspirant senators, the 12 slots of a theoretical LP-UNA coalition would be unrealistic.

“With five incumbent reelectionists, there are only seven slots left for incoming senators. The number of declared candidates is higher so this is not doable since you cannot make those who declared back out at this point,” Marcos said.

Jinggoy said it was still important for the administration candidates to face off with opponents from a rival group in 2013. With Cynthia D. Balana