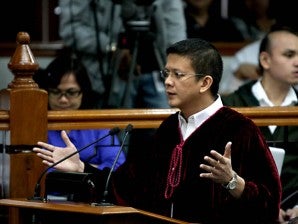 Has the Supreme Court learned its lesson?

Apparently smarting from criticisms it flip-flopped again on the petition of bus operators, the high court on Tuesday deferred the announcement of its ruling on the motion questioning the composition of the Judicial and Bar Council (JBC).

In a press briefing, acting court spokesperson Ma. Victoria Gleoresty Guerra said the high tribunal had reached a decision on the petition of former Solicitor General Francisco Chavez, but opted to make it public on Thursday.

However, three court insiders told the Philippine Daily Inquirer that a majority of the justices have voted to grant Chavez’s petition, which sought to bar Senator Francis “Chiz” Escudero and Iloilo Representative Niel Tupas Jr. from participating at the same time in the selection of the next Chief Justice.

Guerra told reporters that the justices ruled it would be best to wait for the official promulgation of the resolution, concerned that there might be a last-minute change of vote.

“It’s just a matter of preparing the dissenting opinion and the (main) decision,” she said. “In that way, it will be easy for you to read the decision and see the basis (of the ruling).”

Chavez has argued that Section 8, Article VIII, of the Constitution stipulates that the JBC should be composed of seven members “with only one member from the Congress.”

Two of the sources said seven justices shared Chavez’s position that the Congress should only have one vote in the search for the replacement of Renato Corona, who was ousted by the Senate impeachment court on May 29.

Guerra declined to confirm or deny the report.

She also denied suggestions that Carpio’s directive was in response to the negative reactions triggered by the court’s “flip-flopping” on the injunction order it had issued against the fixed salary scheme for bus conductors and drivers.

“I cannot speculate. There was no information like that given to me,” she said.

On July 10, the court recalled the status quo ante order it issued the previous day which temporarily stopped the government from implementing the fixed salary scheme for bus conductors and drivers in Metro Manila.

The court was previously criticized for recalling its rulings on some controversial cases in the past, such as the legal questions raised in the cityhood of 16 municipalities and the creation of a new Dinagat Island province.

The tribunal’s flip-flopping was included in the articles of impeachment against Corona.

Earlier, constitutionalist Fr. Joaquin Bernas said that following the provision of the Constitution, the JBC members should be composed of seven only with one representative from Congress. But he admitted that it has been a practice that there are two representatives from Congress who have half a vote each or take turns in voting.