Space shuttle thunders off for last voyage into history 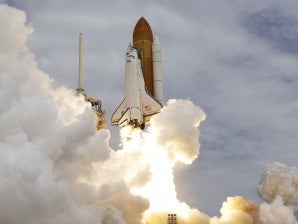 The space shuttle Atlantis lifts off from the Kennedy Space Center in Cape Canaveral, Fla. Atlantis is the 135th and final space shuttle launch for NASA. AP/JOHN RAOUX

After days of gloomy forecasts full of rain and heavy cloud cover, the spaceship lifted off at 11:29 a.m.— just 2 1/2 minutes late—and embarked on the 135th shuttle mission. The crowd of spectators was estimated at nearly 1 million.

The shuttle was visible for 42 seconds before disappearing into the clouds.

It will be at least three years—possibly five or more—before astronauts are launched again from US soil, and so this final journey of the shuttle era packed in crowds and roused emotions on a scale not seen since the Apollo moon shots. Nasa has set a long-term goal of flying to an asteroid and eventually Mars.

“Take a deep breath. Enjoy a little time here with your families again. But we’ve got a lot of work to do. We’ve got another program that we’ve got to get under way,” Nasa Administrator Charles Bolden told the launch control team after Atlantis reached orbit. He added: “We know what we’re doing. We know how to get there. We’ve just got to convince everybody else that we know what we’re doing.”

Atlantis’ crew will deliver a year’s worth of critical supplies to the International Space Station and return with as much trash as possible. The spaceship is scheduled to come home on July 20 after 12 days in orbit.

In a statement, US President Barack Obama saluted Nasa’s work force, saying, “You helped our country lead the space age, and you continue to inspire us each day.”

“Today’s launch may mark the final flight of the space shuttle,” he added, “but it propels us into the next era of our never-ending adventure to push the very frontiers of exploration and discovery in space.”

The four experienced space fliers rode Atlantis from the same launch pad used more than a generation ago by the Apollo moon-mission astronauts. Nasa waived its own weather rules in the final minutes of the countdown to allow the launch to go forward. In the end, though, the liftoff was delayed not by the weather but by the need to verify that the launch pad support equipment was retracted all the way.

The last-minute suspense was fitting in a way, since Florida’s famously stormy weather delayed numerous shuttle missions almost from the start of the program and was a major reason space flight never became routine, as Nasa had hoped for.

Nasa’s original shuttle pilot, Robert Crippen, now 73, was among the VIPs. He flew Columbia, along with Apollo 16 moonwalker John Young, on the inaugural test flight in 1981. Other notables on the guest list: a dozen members of Congress, Cabinet members, the chair of the Joint Chiefs of Staff, four Kennedy family members, singers Jimmy Buffett and Gloria Estefan, and two former Nasa chiefs.

“I’m a little bit sad about it, and a little bit wistful,” said Jennifer Cardwell, 38, who came with her husband, John, and two young sons from Fairhope, Alabama. “I’ve grown up with it.”

The space shuttle was conceived even as the moon landings were under way, deemed essential for building a permanent space station. Nasa brashly promised 50 flights a year—in other words, routine trips into space—and affordable service.

But the program suffered two tragic accidents that killed 14 astronauts and destroyed two shuttles, Challenger in 1986 and Columbia in 2003. Nasa never managed more than nine flights in a single year. And the total tab was $196 billion, or $1.45 billion a flight.

Yet there have been some indisputable payoffs: The International Space Station would not exist if it were not for the shuttles, and the Hubble Space Telescope, thanks to repeated tune-ups by astronauts, would be a blurry eye in the sky instead of the world’s finest cosmic photographer.

The station is essentially completed, and thus the shuttle’s original purpose accomplished. Nasa says it is sacrificing the shuttles because there is not enough money to keep the expensive fleet going if the space agency is to aim for asteroids and Mars.

Thousands of shuttle workers will be laid off within days of Atlantis’ return from its 33rd flight, on top of the thousands who already have lost their jobs. And the three remaining shuttles will become museum pieces.

After Atlantis took flight, Nasa launch director Mike Leinbach choked up as he thanked the members of his control team, some of whom will be out of a job. Launch controllers lingered in the firing room, posing for pictures and shaking hands.

“It seemed like we didn’t want to leave,” Leinbach told reporters. “It was like the end of a party, and you just don’t want to go, you just want to hang around a little bit longer and relish our friends and what we’ve accomplished.”

This day of reckoning has been coming since 2004, a year after the Columbia tragedy, when US President George W. Bush announced the retirement of the shuttle and put Nasa on a course back to the moon. Obama canceled the back-to-the-moon program in favor of trips to an asteroid and Mars.

But Nasa has yet to work out the details of how it intends to get there, and has not even settled on a spacecraft design.

The space shuttle demonstrates America’s leadership in space, and “for us to abandon that in favor of nothing is a mistake of strategic proportions,” lamented former Nasa Administrator Michael Griffin, who led the agency from 2005 to 2008. AP

Read Next
Ninoy’s camera among Morato’s prized collection
EDITORS' PICK
Geek out at TOYCON 2022 powered by Smart Signature
UK’s Boris Johnson will resign, BBC reports
High inflation: Your P1 is now worth only 87 centavos
High-risk pregnancy: Reducing your risk is in your hands
Unemployment rate up to 6% in May
House energy committee chair Arroyo bats for cheap electricity
MOST READ
Suspect in grisly killing of missing woman in Bulacan arrested
Kim Atienza’s daughter flaunts bikini body in response to critics of her ‘revealing photos’
Cop slain in Isabela ambush
FDA probes popular Filipino noodle brand for ‘high level of ethylene oxide’
Don't miss out on the latest news and information.