Dozens dead in US heat as relief rolls in 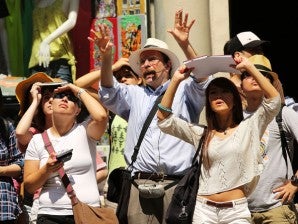 A group of tourists look up at a building along Broadway during warm weather on July 6, 2012 in New york City. AFP FILE PHOTO

WASHINGTON – A crippling heat wave that has held large swathes of the United States hostage gave way slightly on Sunday – but not before leaving dozens dead in several states, officials and local media said.

After days of sweltering highs around 100 degrees Fahrenheit (38 Celsius) in the central and eastern parts of the country, forecasters said that cooler air was slowly swooping south from Canada.

“Temperatures will drop, bringing some much needed relief,” the National Weather Service said.

But the oven-like temperatures took their toll all the same, with the elderly and infirm especially vulnerable.

The eastern state of Maryland has recorded at least 13 heat-related deaths since June 8, with 11 of the victims aged over 65, Ed McDonough, a spokesman for the Maryland Emergency Management Agency, told AFP.

“We are hoping that this is it,” he said in reference to the extreme weather.

In Ohio, three seniors with heart problems perished due to the heat after a fierce band of firestorms tore across several states on June 29, leaving them and millions of others without much-needed air conditioning after power cuts.

“I can confirm three heat-related deaths,” Tamara McBride of Ohio’s Emergency Management Agency told AFP. “However, there may be more.”

In Chicago, where temperatures sank Sunday to more comfortable levels, the number of confirmed deaths linked to the record-setting weather soared to 18, the Chicago Tribune reported.

Officials in Illinois could not immediately confirm the figure.

In Indiana, meanwhile, an infant died after being left in a stiflingly hot car, according to the indystar.com website.

Read Next
ITCZ to bring rains in parts of Philippines – Pagasa
EDITORS' PICK
Petition to reverse Comelec decision on Bongbong Marcos’ DQ case reaches SC
Luxe property: A way to build, preserve wealth
Congress canvassing of votes for president, VP to begin May 24
PH detects local transmission of Omicron subvariant BA.2.12.1
House energy committee chair Arroyo bats for cheap electricity
Honolulu Café is the cure for your Egg Tarts and Roastings cravings
MOST READ
Heart Evangelista gets a ‘no’ from Chiz Escudero after asking, ‘Do I deserve a bag?’
CebuPac places pilot under disciplinary review after ‘baseless’ post vs Robredo
Closure order vs Megaworld Corp halted as firm vows cooperation with BIR – exec
Duterte OKs law extending validity of registration, license to carry firearm
Don't miss out on the latest news and information.