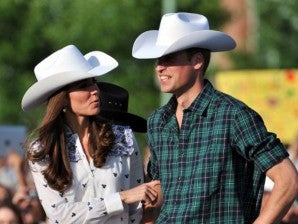 COWBOY WILL and COWGIRL KATE. Britain's Prince William and his wife Catherine, the Duchess of Cambridge, wearing wide-brimmed Cowboy hats, watch a rodeo demonstration at the BMO Center in Calgary, Alberta, July 7, 2011. The Prince and his wife are on a royal tour of Canada from June 30 to July 8. AFP

And, said the future king with a wide grin, they received “fantastic” white, broad-rimmed cowboy hats made from rabbit fur for him and her.

Arriving in a 1912 stagecoach for a sampling of Calgary’s 99th annual Stampede rodeo, billed as “the greatest outdoor show on Earth,” the duke and duchess of Cambridge watched bulls throw riders and mingled with cowboys.

Children as young as five demonstrated “mutton busting,” a first step toward becoming full-fledged bull riders, while line dancers shimmied to the twangs and yawls of old time country music.

“That was different,” commented the prince, looking casual in jeans and a Western shirt. Catherine, the former Kate Middleton, donned a blouse by Alice Temperley and jeans.

Their first official foreign trip since their May wedding of-the-century saw William canoeing with his bride in the far north, piloting a Sea King helicopter into a lake in emergency water landing drills in Prince Edward Island, and snuggling with Catherine in a wooden cabin in the Rocky Mountains.

From the start, hundreds of thousands of well-wishers welcomed the royal couple to Ottawa for Canada Day celebrations, throngs showed up at every stop along the tour to greet them and millions followed their adventure on television, including Queen Elizabeth II, according to William.

“I say, we haven’t seen a love-in like that since the first visit of the Beatles!” Prime Minister Stephen Harper told a private reception to mark the royal couple’s last night in Canada.

“Indeed, everywhere you went you left a trail of utterly charmed Canadians in your wake.”

William responded: “In 1939, my great grandmother, Queen Elizabeth the Queen Mother, said of her first tour of Canada with her husband, King George VI: ‘Canada made us.’ Catherine and I now know very well what she meant. 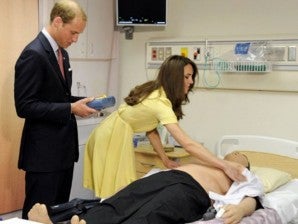 ROYAL LIFE SAVER. Britain's Prince William and his wife Catherine, Duchess of Cambridge, are shown how to save the life of a medical test mannequin at the University of Calgary ward of the 21st century in Calgary, Alberta, July 7, 2011. AFP

“Canada has far surpassed all that we were promised,” he added. “Our promise to Canada is that we shall return.”

The duke and duchess had earlier arrived from a romantic getaway at the rustic Skoki Lodge, built in the 1930s in the majestic Rocky Mountains about a dozen kilometers (seven miles) from Lake Louise in Banff National Park.

The nearby lake is named after Louise Caroline Alberta, the fourth daughter of William’s famous ancestor Queen Victoria.

The plumbing was reportedly only just installed in the Skoki wooden cabin a few weeks prior to the couple’s visit.

They had given their media entourage the slip late Wednesday to head into the outback after touring forest fire devastation in Slave Lake, Alberta.

In Calgary, some royal fans had camped out in tents and sleeping bags since Tuesday hoping for a glimpse of the couple.

Calgary also handed out some 5,600 wristbands, giving locals access to two areas which William and Catherine were to visit on Thursday. Some of them could be found for sale on the Internet for hundreds of dollars.

“I absolutely adore Will and Kate,” Katrina Bowman, who got a free wristband, told the Calgary Sun. “I was up all night watching their wedding… and I just knew I had to see them when they came to Calgary.”

Friday morning, William and Kate will kick off the Stampede opening parade with 850 “parade-broke” horses, bands and floats, cowboys and clowns.

The festival and agricultural exhibition — which hearkens back to the days when lonesome cowboys rode the open range — today attracts one million spectators annually to the foothills of the Rocky Mountains.

More than 300,000 well-wishers are expected along the parade route downtown, according to officials.

The couple will leave Canada on Friday after a visit to Calgary’s zoo and head for Los Angeles for a three-day visit to the US West Coast state of California.