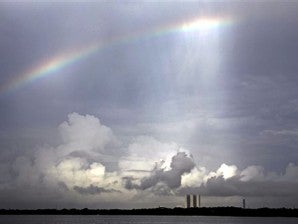 SKYWAY TO SPACE. A rainbow is seen over the Vehicle Assembly Building at the Kennedy Space Center Thursday, July 7, 2011, in Cape Canaveral, Fla. The space shuttle Atlantis is scheduled to launch on Friday, July 8 and is the 135th and final space shuttle launch for NASA. AP

CAPE CANAVERAL, Florida — Thunderstorms threatened to delay the last space shuttle launch, set for Friday, and a lightning strike near the pad prompted NASA to convene an engineering panel to discuss any possible damage.

The lightning hit a water tower about 500 feet (150 meters) from the launch pad at midday Thursday, the space agency said. Technicians hurried out to check for any signs of electrical problems. A review board was quickly assembled; officials said early indications were that the shuttle and pad were fine.

Over the years, lightning has struck on or near the launch pad occasionally, delaying a few launches but causing no damage.

The forecast for Friday, meanwhile, looked dismal, with only a 30 chance of acceptable weather at launch time.

“There’s some opportunity there,” he said Thursday as the rain set in. “It’s a really tough day if you make a decision not to go and it turns out to be good weather.”

NASA is closing out its 30-year space shuttle program to take aim at asteroids and Mars, destinations favored by the White House. Private companies will take over the job of hauling cargo and crews to the International Space Station, freeing NASA up to focus on points beyond.

“We believe that on behalf of the American people, it is time for NASA to do the hard things to go beyond low-Earth orbit,” NASA’s deputy administrator, Lori Garver, told reporters gathering for the launch.

The odds of good flying weather improve with each passing day, said shuttle weather officer Kathy Winters. The launch time moves slightly earlier every day, and that helps, she said.

NASA has until Sunday, possibly Monday, to get Atlantis and its four astronauts in orbit. Otherwise, the spacecraft will remain grounded until the following weekend because of an Air Force rocket launch that takes priority.

Rain or shine, hundreds of thousands of people are expected to jam the area for the launch. Some estimates put the crowd at close to 1 million. Dozens of astronauts already are in town, including the very first shuttle pilot Robert Crippen, who opened the era aboard Columbia in 1981.

“It’s a sad time for me obviously. But it’s also a time when I feel pride. I’m proud of what the shuttle has done,” Crippen told The Associated Press. “You’ve got to get it back down on the ground safely. So when we finally get ‘wheels stop,’ it will be an emotional moment for me.”

The commander of that original shuttle shot, moonwalker John Young, opted to stay home in Houston. He didn’t want to deal with all the fuss, Crippen explained. “It’s not his kind of thing,” he said. “He’ll watch it on TV,” he said.

Along one of the main roads leading into Kennedy Space Center, businesses and even churches joined in the celebration with billboards pronouncing “God Bless Atlantis July 8” and “Godspeed Atlantis and Crew.”

The countdown, at least, was going well, with only a few minor technical problems at the pad reported.

Atlantis is bound for the International Space Station with a year’s worth of provisions. NASA wants the orbiting outpost well-stocked in case there are delays in getting commercial cargo hauls started. The first privately operated supply run — by Space Exploration Technologies Corp. — is tentatively scheduled for late this year.

NASA payload manager Joe Delai got emotional as he showed pictures of the 21-foot (6.4-meter) -long, shiny metal cargo carrier in Atlantis’ payload bay. That massive bay is the one thing that none of the smaller follow-on craft will have.

“This is just beautiful … It’s not a piece of metal. It’s a way of life,” he said. “We’re just inches into what we know, and everything we do now is what I consider the foundation for human spaceflight.

“Yeah, it’s emotional, but it’s also part of history. I think that’s what you’re seeing from a lot of folks down here.”

Also aboard Atlantis: multiple sets of patches and pins representing all 135 shuttle missions, as well as thousands of shuttle bookmarks for children. The patches and pins will be presented to schools following the flight, Delai said.

The 12-day voyage by Atlantis should culminate with a touchdown back at Kennedy on July 20, the 42nd anniversary of man’s first steps on the moon.

“There’s an old saying that says it’s better to travel well than to arrive,” Spaulding said. “And I’d have to say after the last 30 years, certainly our program and these shuttles, throughout all of their missions, have travelled very well. And after 135’s landing, I think we can say at that point that we’ve arrived.”