Breathalyzer tests compulsory on all vehicles in France | Inquirer News

Breathalyzer tests compulsory on all vehicles in France 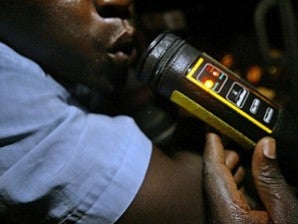 A Kenyan police-officer tests the alcohol-intake of a driver in this 23 December 2005 photo in Nairobi. The use of the device, marketed as Alcoblow by its US manufacturer, has created an uproar in Kenya, where many consider binge-drinking to be something of a national past time . AFP / TONY KARUMBA

“Alcohol has been the main cause of mortality on roads since 2006,” according to road security authorities.

About a third of fatalities on French roads is due to drink driving, a rate that far surpasses the 17 percent recorded in Britain or 10 percent in Germany.

According to a survey published Sunday, just over half of respondents — 57 percent — said they have yet to equip their vehicles with breathalyzer tests.

Drivers are split over the measure.

“I find it absurd to be booked for that. But it’s the law, so I’ll be subject to it,” said Hamou Louachiche, 38, who still does not have a test in his car.

He believes that such tests would be more useful in bars or nightclubs.

Others however welcome the measure, saying it would reduce drink driving.