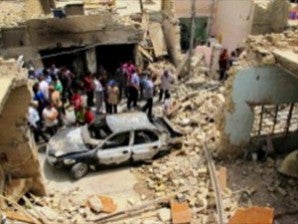 Iraqis inspect the site of a car bomb that exploded in a popular market in Baghdad on June 28, 2012 killing at least eight people and wounding 30. AFP/KHALIL AL-MURSHIDI

In the north, a roadside bomb killed a soldier and wounded two others in the city of Mosul, while another roadside bomb near the town of Tal Afar killed an army captain, and gunmen shot dead a civilian near the village of Baaj, an army officer and Dr Mahmud al-Hadidi of Mosul Hospital said.

And gunmen with automatic weapons killed a civilian in Al-Tun Kubri, an area north of Kirkuk city, police said.
Saturday’s deaths brought the number of people killed in attacks since June 13 to at least 228 – an average of 12 per day. That is a far higher toll than the 132 official figures show were killed in May.

Violence in Iraq has declined significantly since its peak in 2006 and 2007, but attacks still remain common.