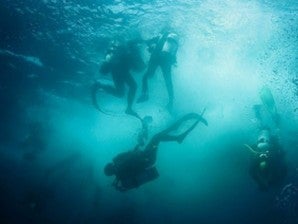 The three men and one woman were part of a larger group that had set off to explore Blood Cave, one of a series of underwater caves popular with amateur divers.

Several members of the group managed to get out of the cave in the Salerno Gulf near the small port of Palinuro, authorities said, but the four others – three Italians and one Greek – were left behind.

Police named the Italians as Andrea Pedroni and Douglas Rizzo, both 40 and from Rome, and 36-year-old Susy Covaccini from Salerno.

Rizzo, the group leader, was the father of a seven-month-old baby.

No official explanation was given for the tragedy but rescuers and members of the group who escaped unhurt believed the divers could have caused large quantities of sand to shift as they swam through the cave’s many passages, which then blocked their visibility, causing them to lose their way.

The string of 35 underwater caves include the Blood Cave – so-called for the red colouring of its walls caused by bacteria – and the Blue Cave, a favorite with scuba divers.