MANILA, Philippines—Justice Secretary Leila De Lima said she was not “personally interested” in the Chief Justice position but said she would have to think on her options. 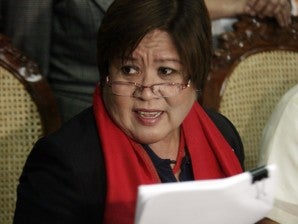 “Personally, I’m not interested,” de Lima said in a chance interview on Wednesday.

“Sa mga dati kong posisyon (In my previous posts), I was also not personally interested but if I have to decide on those things then I’ll deeply reflect on that—where can I best serve the public interest, the national interest, the public good,” she said.

In his nomination, Limare cited the various positions handled by De Lima as well as several awards and distinctions she has received.

De Lima said the Supreme Court would be a new world for her.

“I am not being used to being in a collegial body. My persona and my personality, I think, I don’t know kung bagay ako doon,” she said.

“To put it lightly, a Chief Justice is passive. Seldom seen, seldom heard. Only read. Can you imagine Leila De Lima seldom seen and seldom heard?”

“Although, I can always adjust to any environment or atmosphere. I can be professional. Pero doon ako nag-aalangan and whether at this point I’m ready to head such a crucial institution such as the Supreme Court,” she said, but added that she would also talk to President Aquino about it.

As of Wednesday, 11 were submitted to the Judicial and Bar Council (JBC). Of the 11, one has applied for the position while the 10 have been nominated. Only 2 of the 10  nominees have confirmed their nomination for the Chief Justice position and they are Atty. Katrina Legarda and former University of the Philippines College of Law Dean Raul Pangalangan.