Hundreds evacuated as US wildfires grow

LAPORTE, Colorado – Firefighters on Sunday were fighting wildfires that have spread quickly in parched forests in Colorado and New Mexico, forcing hundreds of people from their homes and the evacuation of wolves from a sanctuary. 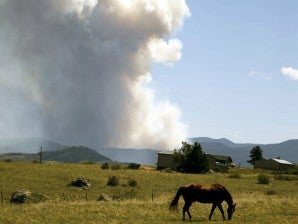 A horse grazes in a pasture along Colorado County Road 80C in Larimer County, Colo., as smoke billows from a wildfire Saturdaym June 9, 2012, northwest of Fort Collins, Colo. The cause of the fire is not yet known. AP/LARAMIE DAILY BOOMERANG, ANDY CARPENEAN

The Colorado fire, burning in a mountainous area about 15 miles (24 kilometers) west of Fort Collins, grew to 22 square miles (57 square kilometers) within about a day of being reported and has destroyed or damaged 18 structures.

Strong winds, meanwhile, grounded aircraft fighting a 40-square-mile (104-square-kilometer) wildfire near the mountain community of Ruidoso in southern New Mexico. Crews were still working to build a fire line around the fire, which started Friday and has damaged or destroyed 36 structures.

It wasn’t immediately clear how many of the structures lost were homes.

In Colorado, the fire sent up heavy smoke, obscuring the sun and creating an eerie, orange dusk in the middle of the day. The smell of smoke drifted into the Denver area and smoke from the fires spread as far away as parts of central Nebraska, western Kansas and Texas.

The latest New Mexico fire is smaller than the Whitewater-Baldy fire — the largest in the state’s history — but it’s more concerning to authorities because it started closer to homes, said Dan Ware, a spokesman for the New Mexico State Forestry Division. He said the number of Ruidoso evacuees was in the hundreds, but he didn’t have an exact figure.

Karen Takai, a spokeswoman for crews battling the Ruidoso fire, said smoke is heavily impacting the community of Capitan, about 5 miles (8 kilometers) northeast of the fire. She said in addition to the communities that have been evacuated, Capitan and others could face evacuation.

Elsewhere Sunday, firefighters were battling a wildfire that blackened 6 square miles (15.5 square kilometers) in Wyoming’s Guernsey State Park and forced the evacuation of campers and visitors. Cooler weather was helping firefighters in their battle against two other wildfires in southern Utah.

In Colorado, authorities sent nearly 1,800 evacuation notices to phone numbers but it wasn’t immediately clear how many residents had to leave. About 500 people had checked in at Red Cross shelters. Larimer County sheriff Justin Smith said. He said there was an unconfirmed report of a person unaccounted for, but he wouldn’t elaborate.

Authorities say it’s the worst fire seen in Larimer County in about 25 years. It spread as fast as 1 1/2 miles (2.4 kilometers) an hour Saturday, skipping and jumping over some areas but burning intensely in trees in others. Flames were coming dangerously close to deputies who were telling some residents to evacuate, Smith said.

Kathie Walter and her husband helped friends several miles (kilometers) away evacuate from the Colorado fire on Saturday. When they got home, they were surprised to get a call warning them to be ready to evacuate just in case. But Walter didn’t want to wait.

“Smoke was coming in hard. We could not see flames or orange or black smoke. But we didn’t need to see anymore. We just said ‘Hey, let’s get out of here,'” she said.

They evacuated with their five cats and two dogs. They had a head start. After a wildfire in the area last year, they had left two suitcases packed in their garage.

The blaze also forced the evacuation of 11 wolves from a sanctuary near the fire. KUSA-TV in Denver reported that 19 wolves remained behind at the sanctuary, which has underground concrete bunkers known as “fire dens” that can be used by the animals.

Eight air tankers — including two from Canada — and several helicopters were on the scene to help fight the blaze.

The speed at which the fire has spread has dashed any hopes of containment for the time being.

“These folks are doing everything they can, but Mother Nature is running this fire,” Smith, the sheriff, said.

In New Mexico, the mix of timber, dry grass and the steepness of the slopes were making the firefighting efforts more difficult.

The fire was burning in steep, rocky, inaccessible terrain in the White Mountain Wilderness of the Lincoln National Forest, which is home to Smokey Bear, who became the nation’s symbol of fire prevention in the 1940s.

More than 300 firefighters were battling the blaze with help from three large air tankers, three heavy helicopters and three Blackhawk helicopters. There were also 100 National Guard troops in Ruidoso.