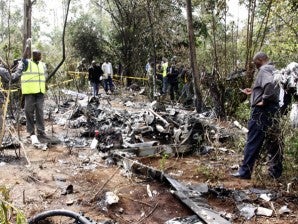 Kenyan officials inspect the area of the helicopter wreckage after it crashed in Ngong forest, on the outskirts of Nairobi, Kenya, Sunday, June 10, 2012. Kenyan police say cabinet minister George Saitoti, who once served as Kenya's vice president, was one of six people killed in the crash. AP PHOTO/KHALIL SENOSI

NAIROBI, Kenya – Kenya’s internal security minister was killed with five other people when the police helicopter they were traveling in crashed in a forest near Kenya’s capital, officials said Sunday. An anti-corruption crusader said the incident calls into question the government’s procurement of airplanes and helicopters for its security forces.

The death of Saitoti is a “great tragedy that has befallen our country at this time as we are making elaborate preparations to hold peaceful elections,” Prime Minister Raila Odinga said at the scene of the crash, a forest in the city’s outskirts.

It was not immediately clear what caused the accident. Kenyan police cordoned off the scene of the crash and said they were investigating. Rescue officials collected the charred and scattered remains of those killed.

“As we speak now, nobody knows the cause of the accident,” Odinga said. “Nobody knows, and that’s why the experts are going to carry out investigations.” He said that Saitoti and Ojode were on their way to a political event in western Kenya.

Saitoti, an American-trained economist and mathematician, was one of the most visible figures in Kenyan politics. For over a decade he was a deputy to former President Daniel arap Moi.

As security minister, he was the government’s spokesman on security matters, including Kenya’s decision to send troops to Somalia last year. Analysts say he played a key role in that decision.

Saitoti appeared often on national television to reassure the public in the aftermath of deadly attacks blamed on the Somali militant group al-Shabab.

Al-Shabab, in a message sent from its official Twitter account, welcomed “the death of the evil minister,” saying Saitoti was “Better off dead!” The militant group blamed him for the suffering of Muslims in Somalia and Kenya.”

“Saitoti played a prominent role in overseeing the abduction, torture and imprisonment of hundreds of innocent Muslims in his war against Islam,” al-Shabab tweeted.

Johnnie Carson, the U.S. assistant secretary of state for African affairs, said during a visit to Kenya on Sunday that Kenya “has lost one of its most outstanding public servants.” He called the loss a great tragedy and said the U.S. extended its condolences.

Saitoti announced last year that he would seek the Kenyan presidency in 2013.

Odinga said that four years ago on the very same day, two Kenyan Cabinet ministers who were his close allies died in a plane crash.

Anti-Corruption crusader Mwalimu Mati said the crash should make the country focus on the history of bogus government purchases for the Kenya Police Air wing. Mati runs the corruption watchdog Mars Group, which has done several reports on the government’s purchase of police helicopters and their maintenance. It has called the purchases questionable, and pointed out that they have cost the country millions of dollars since 1999.

“Corruption in public procurement can come back to bite you,” Mati said.

Mati said Saitoti will leave a controversial legacy. He said Saitoti will be remembered for his role when a financial scandal almost destroyed Kenya’s economy. Saitoti faced allegations of being involved in Kenya’s largest financial scam in the 1990s when he served as vice president and finance minister under Moi.

Saitoti resigned as education minister in February 2006, but was re-appointed months after a constitutional court ruled that an inquiry that investigated the 1990s scandal, called Goldenberg after the company at its center, wrongly concluded that Saitoti needed to be further investigated for his alleged role.

The court also ruled that any reference to Saitoti should be removed from the report.

At the time of the ruling, Saitoti said that he felt vindicated and a burden he had carried for more than a decade had been lifted. The government said it would appeal the ruling, but it did not do so.

The scandal began as a ploy to get export credits for gold and diamond jewelry but evolved into a complex web of financial dealings in which the government lost hundreds of millions of dollars.