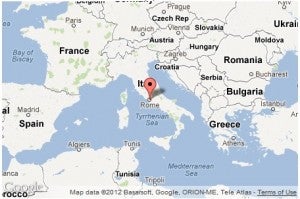 ROME—At least eight people were killed on Tuesday when a strong earthquake rocked northeastern Italy, just nine days after another quake in the same region wrought death and destruction.

The 5.8 magnitude quake struck about 60 kilometers (40 miles) east of the city of Parma, according to the Geographical Institute of Modena, and sent panicked residents rushing into the streets.

It followed a 6.0 magnitude quake in the industrial northeast on May 20 which killed six people and left thousands in makeshift tent dwellings, with many homes and historic buildings reduced to rubble.

“Last night was the first night we’d spent back in our homes after the first quake. Then another one hit,” one resident told SKY TG24 television in Sant’Agostino.

At least three victims were workers crushed by falling rubble.

Three were killed in San Felice del Panaro when a factory collapsed, two others died in the town of Mirandola, one in Concordia and one in Finale, police captain Salvatore Iannizzotto in Modena told the ANSA news agency.

The eighth victim, the parish priest in the town of Rovereto di Novi, was also found dead but Iannizzotto said it was not clear whether he died of shock or was killed in the quake.

Tuesday’s quake was felt throughout northern and central Italy, causing the collapse of several structures already weakened by the quake earlier this month.

In Pisa, home of the famous leaning tower, offices were evacuated as a precautionary measure. People ran out into the streets from shops and offices in Milan, Bologna and the Aosta Valley, close to the French border.

In Bologna, where the quake was clearly felt, trains to Milan, Verona and Modena were suspended, the Italian railway network said, while controls were carried out to check if lines had been damaged.

There were moments of panic in Venice, where a statue fell to the ground, lightly wounding a passerby.

Around 7,000 people who fled their homes in the region when the first earthquake hit are still living in around 89 tent camps erected in fields, sports fields, car-parks and schools. The camps can take up to 9,000 people.

The region has been hit by a series of quakes and aftershocks over the past two weeks.

The latest disasters struck just over three years after a 6.3-magnitude quake devastated the city of L’Aquila in central Italy in March 2009, killing some 300 people and leaving tens of thousands homeless.