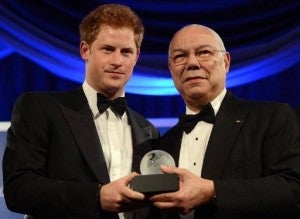 WASHINGTON — Britain’s Prince Harry joined a black-tie dinner in Washington on Monday to accept a humanitarian prize for his work supporting charities that help injured British and US military personnel.

Harry, 27, arrived at the Atlantic Council fund-raising dinner to a small bevy of young female admirers, who he neglected to acknowledge as he stepped inside the luxury Ritz Carleton hotel for the gala.

Harry, who himself served in Afghanistan four years ago, is being recognized for his efforts championing forces charities like Walking With The Wounded and Help For Heroes.

St James’s Palace, which represents Harry, has said he will use the award “to pay tribute to British and American veterans’ charities for their achievements in helping to rehabilitate wounded servicemen and women and to reintegrate those who have served in the armed forces into civilian life.”

Harry, who is third in line to succeed his grandmother Queen Elizabeth II, has chosen to accept the award on behalf of himself and his elder brother, Prince William.

Through a foundation in their name, the princes tackle the issue of caring for disabled and wounded servicemen and women.

Harry has recently completed 18 months of training as an Apache attack helicopter pilot and has expressed a determination to return to Afghanistan.

He was hastily withdrawn from his first tour of duty in 2008 when a media blackout was broken.

Harry made his first solo overseas tour in March, representing Queen Elizabeth in her diamond jubilee year in the Caribbean and Brazil.