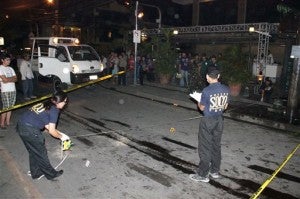 ILIGAN CITY, Philippines—Police authorities here said Sunday they were still piecing together evidence to determine the motive and the identities of bombers in Saturday’s grenade attack that killed two people (not three as earlier reported) and wounded 36 others.

Many of the injured were students on a night out at El Centro, a section of Roxas and Quezon avenues, which has become a popular rendezvous for many Iliganons especially during Saturdays because live bands play there.

Regencia said it was not immediately known how many people were on the AUV as it sped off amid the chaos.

The injured victims were rushed to hospitals by volunteers, policemen and soldiers who came to the rescue, he said.

“So far we don’t have suspects yet but the police were conducting the investigation,” Lucero said.

Regencia said the explosion occurred amid intelligence reports of a terrorist plot in the city.

But he said this was not enough to draw conclusions on the identities of the perpetrators.

“We are still trying to find out who they are and what the motives were,” he said.

In July 2010, a grenade attack in the city was blamed on a group of car thieves retaliating against a police crackdown on their activities.

Seven people were injured in the 2010 blast that hit the Iligan public market.

In July 2009, a car bomb exploded in the city, wounding at least nine persons, including three soldiers.

The police and the military did not make public the result of their succeeding investigations of the event but they initially said the attack was terror-related.—With a report from Julie Alipala, Kate Evangelista, Matikas Santos, Richel Umel, Julie Alipala and Inquirer Mindanao