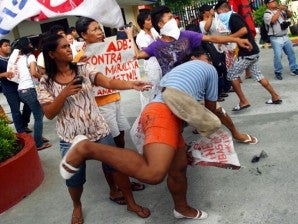 ANTI-ADB Rally- Militant groups throw waste products in front of the PPP(Public-Private Partnership) office in quezon City to protest the ADB conference in Manila, where they claim the Philippine government has a huge debt, and questions where the money is being spent on.INQUIRER/ MARIANNE BERMUDEZ

The Nagkaisa said Aquino’s continued batting for “public-private partnerships” to boost economic growth would be “the final nail on the coffin in which to bury consumers’ protection and workers rights, as Aquino used the affair as a stage to accelerate the transfer ownership of all remaining power, health care and local water assets of the Philippine government to private investors.”

About 200 workers belonging to different groups, waving banners and placards, tried to enter the Cultural Center of the Philippines complex, where the PICC is located, but were prevented by the police.

“President Aquino should not cover up the number of poor in the Philippines and the ADB should not wash its hands of the worsening poverty in the country. The ADB is an instrument of corporate greed that has aggravated the destitution of the 99 percent in Asia,” said Rene Magtubo, national chairman of Partido Manggagawa, a member of Nagkaisa.

“The ADB meeting’s theme of inclusive growth is mere double-speak for its policies of privatization are tailor-fit to facilitate the fire sale of state-owned assets to giant multinationals and big capitalists. As a result of ADB-funded privatization, the costs of electricity and water in the Philippines have skyrocketed and as a result workers real wages have fallen despite yearly increase in nominal wages,” he added.

Nagkaisa also linked the ADB privatization agenda and the the Aquino’s administration PPP program to the President’s Labor Day speech, in which he ignored workers’ plea for decent wages and security of tenure.

The coalition denounced the alleged failure of the ADB to fulfill its anti-poverty mandate and reason for its existence.