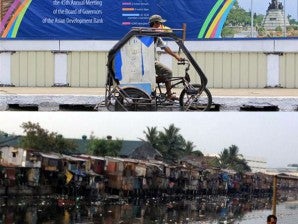 ‘FENCING POVERTY’. A resident pedals his tricycle, locally known as "pedicab", past a wall covered with a tarpaulin poster of the ongoing 45th Annual Board of Governors meeting of the Asian Development Bank at suburban Pasay city south of Manila, Philippines, Thursday May 3, 2012. Behind the wall is the slum along a garbage-strewn creek. (AP and RUEL PEREZ/Radyo Inquirer 990AM)

MANILA, Philippines – The government’s move to fence a poor community along the stretch of the Ninoy Aquino International Airport all the way to the Philippine International Convention Center (PICC), venue of the ongoing annual meeting of Asian Development Bank Board of Governors, has drawn criticism from human rights and militant groups.

“By blocking off struggling families behind a fence, the Philippine government is sending the message that dire poverty can just be ignored,” Jessica Evans, senior international financial institution advocate at Human Rights Watch, said in a statement Friday.

“Instead of trying to hide the poor, the Philippine government should be pressing the bank to tackle poverty head on,” Human Rights Watch added.

“No amount of high walls from the Philippine government can conceal poverty. The reality is that poverty is on the rise and cosmetic changes cannot hide this,” militant group Bagong Alyansang Makbayan (Bayan), said in a separate statement.

The government defended the fence, saying the construction is a “little fixing up” and that the “government needs to show that Metro Manila is orderly.”

Presidential Press Secretary Ramon Carandang said in a report by the Associated Press (AP) that “any country will do a little fixing up before a guest comes.”

“We are not trying to keep the poor out of the picture,” Francis Tolentino, Metropolitan Manila Development Authority (MMDA) chairman, said in the same report. “I see nothing wrong with beautifying our surroundings,” he said.

An estimated 4,000 participants from the finance sector, private sector, civil society activist among others, gathered in Manila for the meeting that began May 2 and would end May 5.

The wall, a fence draped with Philippine tourism tarpaulins, was built in April.

The slum community has been there even before President Benigno Aquino III took office back in 2010.

The Human Rights Watch interviewed residents in the slum community and found out that a local government official had told them not to loiter near the highway so they won’t be seen.

The resident said they were not complaining because they were afraid of being demolished.

Some of the residents in the slum community are beneficiaries of the government’s Conditional Cash Transfer (CCT) program that is being financed by the ADB, Human Rights Watch said.

Bayan said in their statement that the CCT was not working to alleviate poverty. Bayan cited the latest Social Weather Stations (SWS) survey which showed 11.1 million Filipino families consider themselves poor, an increase from 9.1 million families in December last year.

“The latest survey on poverty is a rebuke of the Aquino government and the ADB. The chronic problem shows that the economic impositions of lending agencies like the ADB and World Bank are not working for the people,” Renato Reyes Jr, Bayan Secretary General, said in their statement.

“The theme of the Asian Development Bank’s annual meeting is the importance of inclusive growth,” Evans of Human Rights Watch said. “But the very poor, as this incident shows, have been shunted out of sight. Let’s hope that they are not shunted out of mind.”

The Philippine Communist Party recalled that former first lady Imelda Marcos — notorious for her ostentatious lifestyle — was ridiculed for trying to hide squatter colonies. She erected similar whitewashed walls along the route of foreign visitors to the Miss Universe pageant held in Manila in 1974, and other international events.

About a third of Manila’s 12 million residents live in slums, and a third of 94 million Filipinos live below the poverty line of $1.25 a day. Overall, more than half the population in Asia remains poor. AP