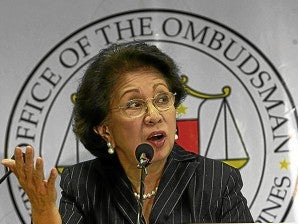 Acting on complaints submitted to her office, Ombudsman Conchita Carpio Morales ordered Corona on April 20 to explain in writing how he managed to have millions in peso and US-dollar accounts in the bank despite his modest government salary. MARIANNE BERMUDEZ

Not only can Ombudsman Conchita Carpio Morales investigate impeached Chief Justice Renato Corona, she can also use her findings to initiate forfeiture proceedings against his assets if the probe into his financial affairs turns up questionable wealth, according to University of the East Law Dean Amado Valdez.

And with evidence of questionable wealth, Valdez said, the Ombudsman can bring criminal charges against Corona once he is out of office.

Valdez said a forfeiture case could be initiated against Corona even if he was undergoing an impeachment trial. Corona cannot invoke immunity because forfeiture is a civil case, Valdez said.

“Even before you go to the criminal court, nothing will prevent the Ombudsman from initiating seizure proceedings. The subject matter [in the forfeiture case] is wealth, not the person,” Valdez said in a phone interview Thursday.

“A forfeiture proceeding could be independent. It could stand on its own,” he added.

Acting on complaints submitted to her office, Morales ordered Corona on April 20 to explain in writing how he managed to have millions in peso and US-dollar accounts in the bank despite his modest government salary.

She told Corona in her order that she had information that the foreign-currency accounts in his name had deposits amounting to $10 million.

Corona denied having $10 million in the bank. Through his lawyer, Ramon Esguerra, Corona said the Ombudsman had no jurisdiction over the Chief Justice.

Morales countered that the Ombudsman Act empowers her to investigate complaints against all government officials.

Valdez said the Ombudsman’s findings could be used to press criminal charges against an impeachable official, once that official is out of office, in the antigraft court Sandiganbayan.

Corona’s impeachment trial in the Senate resumes next Monday.

The question of his foreign-currency bank deposits hangs pending resolution by the Supreme Court of a petition against an investigation that the Philippine Savings Bank (PSBank) has brought against the Senate impeachment court.