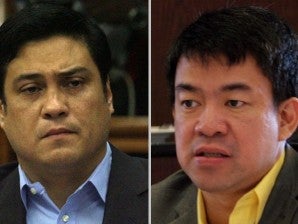 Zubiri, who was here as a guest of the Bangus Festival this year, said it was not his fault that he was one of the “unwitting beneficiaries” of the 2007 election fraud in Maguindanao.

“Those who did it are now in jail. Let us move on from that. Let us learn from that mistake of dirty elections of 2007 and continue to push for clean and honest elections for 2013,” he said.

In November 2011, a joint committee of the Commission on Elections and Department of Justice charged former President Gloria Macapagal-Arroyo, former Maguindanao Governor Andal Ampatuan Sr. and former Comelec officer Lintang Bedol for electoral sabotage for the allegedly fraudulent 2007 election in Maguindanao. No bail was recommended for them.

The three allegedly conspired and helped each other to ensure a “12-0” victory for Arroyo’s Team Unity senatorial candidates, which included Zubiri.

Zubiri was proclaimed the 12th senatorial winner of that election. But he resigned in August 2011 after Bedol admitted that there was massive electoral fraud in Maguindanao.

His resignation paved the way for Pimentel, who placed 13th and who filed an electoral protest against him, to serve out the little over a year that remained of his term.

Zubiri said Pimentel should stop saying that he (Zubiri) knew about the massive cheating.

He said that during the 2007 campaign, he was grouped with Senate Majority Leader Vicente Sotto III and Senators Ralph Recto, Joker Arroyo and Edgardo Angara in Team Unity.

“Wherever I went, they were also there. Almost 24 hours. So, if I knew something, they should have also known. And I tell you now, we did not know anything because we were so busy campaigning,” Zubiri said.

“What happened was very unfortunate. But as I said, we had no participation whatsoever. We are unwitting beneficiaries,” he said.

Zubiri said he did not regret having resigned as senator. “It was the most difficult decision that I had to make in my life. But it was my proudest moment,” he said.

He said he started going around the country in December in preparation for a senatorial candidacy in 2013. Gabriel Cardinoza, Inquirer Northern Luzon