David with granddaughter in living room during attack | Inquirer News

David with granddaughter in living room during attack 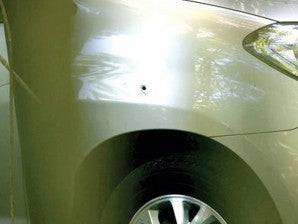 BULL’S-EYE A bullet would have hit Inquirer columnist Randy Ravid and his granddaughter but his car shielded them both. MARIANNE BERMUDEZ

Philippine Daily Inquirer columnist Randy David was with his 10-year-old granddaughter in the living room when gunmen strafed their home on the campus of the University of the Philippines (UP) in Diliman, Quezon City, on Tuesday night.

“I have no known enemies and I could not understand why some people wanted me shot,” UP professor Edgardo Dagdag, the university’s chief security officer, quoted David, also a university professor, as saying to the UP police who first responded to the strafing.

Dagdag told reporters Wednesday morning that three men in the vehicle with plate No. UDM-191 fired at David’s house at No. 17 corner Gomburza and E. Aguinaldo Streets in Area 1 at around 8:50 p.m. and at 9:05 p.m.

Dagdag added that David’s first instinct when he heard the shots, was to protect his granddaughter Julia as he shouted to others to drop to the floor. Julia is the daughter of GMA 7 network reporter Kara David.

The strafing hit the car of David’s wife in the garage.

Kara reported the matter on Twitter, saying nobody was injured in the incident.

“My family is OK. Papa and Julia were in the sala (living room) when they heard around four shots. Good thing the vehicle was parked in the garden. Yun ang tinamaan ng bala at hindi sila. Salamat Panginoon (The bullets hit that and not them. Thank God),” Kara tweeted.

A witness, who reported the strafing to the UP police, said she was with her husband and their baby when she saw a heavily tinted FX Tamaraw stop in front of David’s house,  and  someone who fired three shots.

“But nobody stepped out of the vehicle when the shots were fired,” the witness, who asked not to be named, told reporters.

She said she saw the FX come back and someone on board fired a single shot. “They returned after five minutes as if they had waited for someone to come out of the house,” the witness added.

Dagdag described the strafing as puzzling because he said David,  a longtime professor of sociology in UP, was well-respected.

“This is not an ordinary case. Malalim ito (This is deep). And we are looking into three possibilities,” he said.

But the UP professor declined to share his theories, saying he would first talk to David, whom he described as a good person.

Dagdag said David was surprised by the attack.

No one was hurt in the strafing although the right fender of the Davids’ Toyota Innova had a bullet hole, according to the UP security chief. A slug was found in the vehicle.

An owner’s verification check at the Land Transportation Office revealed that the plate number of the FX was registered to a Nissan “utility vehicle,” owned by Enrique Punzalan of Cainta, Rizal province.

Dagdag said the UP police had obtained a copy of the footage of a neighbor’s closed-circuit television camera, which showed the suspects in the vehicle.

He said the Davids had declined offers of police protection, even as they were puzzled by what could have prompted the attack.

“I talked to his wife (former Civil Service Commission chair) Karina David and she couldn’t understand why the attack happened at all since Professor David is almost semi-retired,” Robredo said.

He recalled asking Karina if she could think of any remote motive possible. “She answered  ‘none, as far as I know,’” he said.

Robredo said he just advised the family to be careful about their movements and to let the authorities know of “any new information that is not normal.”

Asked about the state of security on the UP campus in Diliman, he said the UP system was in a better position to explain as the university has its own police force independent from the Quezon City police.

Representative Sherwin Tugna of the Citizen’s Battle Against Corruption condemned the strafing of David’s house.

Tugna urged the police to look into the incident and provide adequate protection to David, whom he described as a “living national treasure” for his incisive and thought-provoking analyses of social issues.

Chief Superintendent Mario de la Vega, Quezon City Police District director, said they would provide David with a security detail even if he had not formally filed any complaint.

“With or without the complaint, we intend to continue the investigation and deploy police personnel to the area,” De la Vega said.

He said a slug found in David’s vehicle would be subjected to ballistic tests to trace its origin.