CHICAGO — Nobel peace laureates gathered for an annual summit said Monday the work that earned them their prizes is far from over and rallied support for their fight for human rights and global justice. 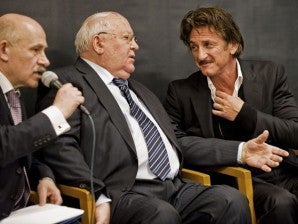 Mikhail Gorbachev, who as president of the Soviet Union helped end the Cold War and open the communist regime to democracy, said the time has come for “a new global order” that must be “more stable, more just and more humane.”

But he warned that tremendous challenges still lie ahead.

Nuclear weapons are once again threatening mass destruction, poverty and deprivation shackle billions of people, while climate change and pollution deprive people of clean water, air and food amid an age-old conflict of man against nature.

“As Nobel laureates, we have the moral right to speak out and we need to take the situation in hand,” said Gorbachev, who launched the annual summit 12 years ago.

“Even though we’re not getting any younger, we must commit our hearts and our souls and we must continue to raise these issues and to speak the truth to power.”

Governments are ignoring commitments made to the United Nations and to their citizens, taking a “condescending attitude to the people” and using “old tricks” to benefit vested interests, he said.

“We must unite, we must have solidarity, we must work resolutely to change the world for the better,” Gorbachev told a packed auditorium at the University of Illinois at Chicago. An audience also followed the speech online.

Frederik de Klerk, who as president of South Africa helped to end apartheid, said poverty and a “failure to manage diversity” were at the root of misery that is not only unjust but also leads to social
unrest, conflict and terrorism.

“Where do the terrorists come from? They come from countries where the masses do not have good living conditions and it is stimulated by fanaticism in its worst form,” de Klerk said.

“They are vulnerable because they have nothing to lose.”

While South Africa is now troubled by the government’s failure to honor its commitments to citizens such as good education, its history also provides a lesson in the power of diplomacy over threats of
violence or embargoes.

“From the South African experience, I can testify that we did not change because of the many big sticks wielded — at times that delayed reform,” de Klerk said.

“Haven’t we had too much big stick and isn’t it time for speaking softly?” he asked, in reference to US president Theodore Roosevelt’s slogan “speak softly and carry a big stick.”

Lech Walesa, who led Poland’s Solidarity movement and served as the nation’s first post-communist president, warned of the threat of unsustainable economic disparities.

“This capitalism — unless we improve it and reform it — will not survive this century,” Walesa said through a translator.

“Certainly we will retain the free market economy and private ownership, but certainly not the kind of injustice we’ve had in place.”

The repercussions of disparities in social benefits and taxation are reflected in the current European economic crisis, but they are also spread throughout the world, Walesa said.

“We must find jobs for everyone. If we fail to do that, they will start a revolution,” he said.

“We need to identify the targets along which we will move, levelling the disparities in order to enlarge freedom for all of us.”

Asked how to engage young people in the fight for social justice, Walesa joked: “If if I knew the answer to that question I could win another Nobel Prize.”

Technology and social media have amplified the voices of activists and enable dramatic changes like the Arab Spring revolutions that have swept through North Africa and the Middle East, said former US president Jimmy Carter.

“You don’t need a leader like Walesa anymore,” said Carter, who won his Nobel Prize for humanitarian work after he left office in 1981.

“Now every student, or everyone who believes in freedom or the end of war can speak independently. And their voices combine and make a powerful weapon.”