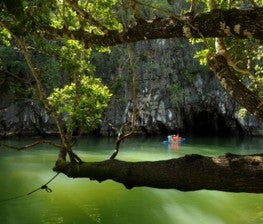 The future of Philippine ecotourism looks bright in part because of a tourist experience that may be likened to going back in time, President Benigno Aquino III said on Saturday night.

Speaking at the inauguration of the Puerto Princesa Underground River (PPUR) as one of the New Seven Wonders of Nature, Mr. Aquino said the Department of Environment and Natural Resources (DENR) and the Department of Tourism (DOT) are working together to promote other ecotourism sites.

“Not long ago, I had the chance to explore the Puerto Princesa Underground River myself. It was an amazing experience. Journeying down a river that winds through a subterranean cave system is like traveling back in time,” he said in a speech at the Esplanade in Pasay City.

“With walls and caverns that have been shaped by the elements and extraordinary formations of stalactites and stalagmites, the underground river is a true example of the artistry of nature, when it is preserved and cared for by man,” he added.

Mr. Aquino said more than 235,000 tourists in 2011 saw the beauty and majesty of the underground river.

“Words alone cannot do justice to the underground river—one must experience it firsthand to be able to understand exactly why it is one of the New 7 Wonders of Nature. So consider this as an open invitation to everyone to visit the PPUR,” he said.

“And we are hoping that even more of you will arrive, so you can see for yourselves what millions of people around the world voted for, and ultimately realize that, yes, it is more fun in the Philippines,” he added.

The President said the choice of the PPUR as one of the New Seven Wonders of Nature “reminds us of how truly blessed our country is and of how it is our task as Filipinos not to take these blessings for granted. We have to act as responsible stewards.”

“And this means valuing our natural resources, and ensuring the environmental sustainability of all our development efforts,” he said.

Tourism has long been a “low-lying fruit” for the economy as it directly creates opportunities for Filipinos and has an immediate effect on our economy, Mr. Aquino said.

“I am told that for each tourist that sets foot on our shores, one new job is created. Tourist will have travel agents fixing their itineraries, tour guides who will show them around and merchants who will, hopefully, be able to sell them our locally made delicacies and handicrafts,” he said.

So, at the end of the day, the success of the PPUR redounds to the success not just of those from Puerto Princesa, but also of all our countrymen across the nation,” he added.