UP graduates get PDI excellence awards 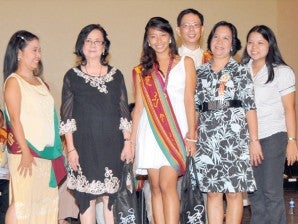 PDI AWARD Inquirer editor in chief Letty Magsanoc (second, from left) gives the newspaper’s Excellence Award to Karen Lou Mesina during the graduation ceremony of the UP CMC. ANDREW TADALAN

At 20 years of age, he knows he has a lot to be thankful for.

After all, Hans Joshua Dantes managed to get into the country’s top university several years ago, finished his course on time and with flying colors.

He is also one of the recipients of the Philippine Daily Inquirer (PDI) Award of Excellence.

The recognition, which is sponsored by the media organization, is given to journalism graduates who have excelled in their academics.

On Sunday morning, Dantes and two other University of the Philippines (UP) Diliman graduates, Karen Mesina and Sarah Isabelle Pacia, received the plaques of recognition from PDI editor in chief Letty Jimenez-Magsanoc.

The awarding took place at the College of Mass Communication’s recognition rites at the UP Film Center.

“The feeling is overwhelming. We are very, very grateful,” Dantes, who, together with Mesina and Pacia, is a PDI scholar, told the Inquirer when sought for comment over the phone.

Saying that there were many other people who could have gotten the award, the first son of Raul and Edith Dantes, both government employees, said he never entertained the possibility that he would go up the stage and be one of those who would receive the plaque.

The soft-spoken Dantes admitted, though, that journalism was his first love and that writing was his passion.

In fact, he said that Bachelor of Arts in Journalism was his first choice when he applied for entrance to the premier state university. His “backup course,” he said, was Education.

“Ever since, [a journalism course] was what I intended to [take up],” Dantes said.

Even now that he is officially a graduate, his plans involve a pen and paper in one way or another.

Dantes said he had passed the UP Law Aptitude Exam, but this did not mean that entering law school was already a given. This was because, he said, his decision would still depend on the other opportunities that would come his way.

Whatever his future holds, Dantes, a Born-Again Christian, said he would always be thankful to the Supreme Being.

Asked to whom he dedicated his achievements, without any hesitation, he said, “To God, of course.”