‘Falcon’ affects over 100,000 persons in Metro Manila, parts of Luzon—NDRRMC 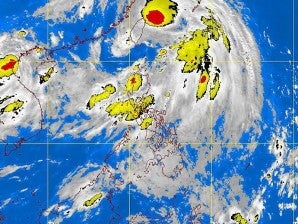 In its 12 noon bulletin, the NDRRMC said that the affected residents were from: the cities of Makati, Malabon, Manila, Marikina, Quezon, Taguig and Valenzuela, Bulacan, Pampanga, Zambales, Rizal and Albay.

No casualties have been reported thus far, Ramos said.

“Sa ngayon, awa ng diyos walang casualty, walang nasaktan, wala ring namatay, so maraming salamat sa pagtugon ng taumbayan [As for now, thank God that there is no casualty, no one got hurt or killed, so thanks to the response of the people,]” Ramos told reporters in a press briefing.

Nevertheless, Ramos advised other fisherfolk to no longer set out to sea, especially during bad weather.

Despite the heavy rainfall, Ramos said that Falcon has had “good behaviour” since it did not make landfall, adding that they are not expecting big damages in agriculture. Initial reported damages to agriculture and infrastructure has reached P1.92 million in Zambales, the NDRRMC said.

As of posting time, Pagasa said that Falcon was 330 km east northeast of Tuguegarao City, still packing maximum sustained winds of 85 kilometers per hour near the center and gusts of up to 100kph.

Falcon is forecast to move 19 kph north northwestward at 19 kph.

Signal No. 1 remains raised over the Calayan, Babuyan and Batanes groups of islands, Pagasa said. All signal warnings have been lowered elsewhere.

“Residents in low lying and mountainous areas under Signal No. 1 are alerted against possible flashfloods and landslides,” Pagasa said.

Falcon is forecast to enhance the southwest monsoon and bring rains over Central and Southern Luzon, Visayas and Mindanao.

Falcon is expected to exit Philippine territory by Saturday morning and is forecast to be 500 km northeast of Basco, Batanes.