TOKYO – Japan has deployed missile batteries in Tokyo and dispatched destroyers carrying interceptor missiles as it boosts its defenses against a planned North Korean rocket launch this month. 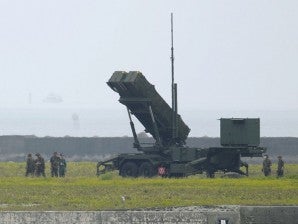 Japan's Self-Defense Force personnel stand by a PAC-3 Patriot missile unit upon its deployment on Japan's southernmost island of Ishigaki in Okinawa, Thursday (April 5, 2012) in preparation for North Korea's rocket launch expected to take place sometime between April 12-16. As the U.S. and its allies decry the planned rocket launch, they're also rushing to capitalize on the rare opportunity it presents to assess the secretive nation's ability to strike beyond its shores. AP Photo/Kyodo News

Pyongyang said it will launch a satellite for peaceful scientific research between April 12 and 16 to mark the 100th anniversary on April 15 of the birth of founding leader Kim Il-Sung.

But the United States and its allies said it is a disguised missile test and that the launch would contravene UN sanctions aimed at curbing North Korea’s missile program.

Patriot missiles were Saturday deployed at three military facilities in the greater Tokyo region and the defence ministry dispatched three Aegis destroyers carrying sea-based interceptor missiles, reportedly to the East China sea
.
“With the latest step, it completes the deployment of PAC3,” said a duty officer at the defense ministry, referring to the Patriot missiles.

Japanese Prime Minister Yoshihiko Noda has given the green light to shoot down the North Korean rocket if it threatens Japan’s territory.

That rocket, which North Korea also said was aimed at putting a satellite into orbit, passed over Japanese territory without incident or any attempt to shoot it down.