‘Gold mine’ in Marcos safe 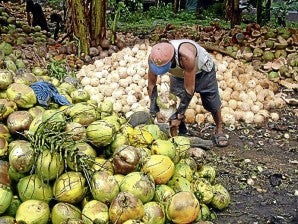 Sen. Joker Arroyo remembers the night US helicopters airlifted the dictator Ferdinand Marcos, his family and close associates to exile in Hawaii as howling mobs stormed Malacañang on Feb. 25, 1986.

Arroyo then was one of the closest aides of Corazon Aquino, who was installed as President earlier in the morning at the close of a four-day People Power Revolution that ended the 20-year Marcos rule. Arroyo had been directed to secure the Palace.

With him were Teddy Boy Locsin, a lawyer who would later join the Aquino administration, anti-Marcos activist Potenciano “Chito” Roque, and TV talk show host Maan Hontiveros, who just happened to tag along.

“Teddy Boy was so engrossed in the library of Marcos,” Arroyo says. “Chito Roque was looking at the guns.” He says he later learned that Roque had taken documents from the Marcos room.

Roque was a member of the August 21 Movement, or Atom, formed following the assassination of the new President’s husband, the opposition leader Benigno “Ninoy” Aquino, in 1983.

In a sworn statement, Roque said he had found a safe in a cabinet, opened it using the combination pasted on the door and saw many documents, including Swiss bank accounts, stock certificates and voting trust agreements.

Arroyo says Roque later handed him a black bag containing the documents. “He told me, ‘What will I do with this?’” Arroyo recalls. “So, I got it. I myself treated it just like another bag.”

The bag stayed for several days in the office of Arroyo at the Malacañang Guest House. He later mentioned it to former Sen. Jovito Salonga, who examined the documents and subsequently reported to Aquino.

“It was a gold mine. That’s what it was,” Arroyo says. “Nobody knew about the ill-gotten wealth. What all of us was fighting for was to regain our liberties. We never realized the gravity of the corruption because we were so bothered by the human rights violations.”

Salonga drafted Aquino’s first executive order, which was issued on Feb. 28 signed by the President and Arroyo, who had been named executive secretary. The order created the Presidential Commission on Good Government (PCGG) headed by Salonga to investigate and recover assets plundered by Marcos, his family and cronies.

For the revolutionary government declared by Aquino, the recovery of illegally amassed assets from Marcos and his wife Imelda, relatives and friends was not only a question of simple justice, but also sheer necessity.

The national treasury was bare.

When Marcos was elected President in 1965, the nation’s foreign debt totaled $600 million. It reached $2 billion in 1972 when martial law was declared and ballooned to $26 billion at the end of his rule. Meanwhile, estimates of the illegal assets of Marcos and his cronies ranged from $5 billion to $10 billion.

The papers uncovered in the vault revealed Marcos dummies in the country’s largest corporations and monies handed out by the Marcoses and then Social Secretary Fe Gimenez to various people.

What caught Aquino’s eye, according to Arroyo, were the papers pertaining to her cousin Eduardo “Danding” Cojuangco and his shares of stocks in San Miguel Corp. (SMC), brewers of one of the world’s renowned beers and one of the country’s largest conglomerates.

Cojuangco, who fled with Marcos to Hawaii on the night of Feb. 25, 1986, was among the suspects in the Ninoy Aquino assassination. No case was ever brought against him in the murder case, but he was regarded at the time by Aquino as a “mortal enemy,” Arroyo says.

There were also negotiable instruments duly endorsed; stock certificates in blank, among many others, in Primavera Farms Inc., Meadow Lark Plantation Inc. and Silver Leaf Plantation, which owned 8,138,440 SMC shares; and, voting rights agreements in favor of Cojuangco.

Lawyers said the instruments found in Marcos’ vault meant the dictator owned or shared with Cojuangco ownership of the SMC shares.

The PCGG said that as of January, it had recovered P93 billion in stashed bank accounts and proceeds of sales of assets by the Marcoses and their allies, including prime properties in New York.

But not one of them has ever been jailed for plunder.

Marcos, the highest-ranking foreign government official ever indicted in the United States under a law crafted to go against the Mafia, died 11 months later before the case was resolved.

In spite of massive evidence, a 12-member jury, the majority with only a high school education, all clueless about the Philippines, acquitted Imelda, naively buying her tearful testimony that she had never written a check as the dictator’s spouse.

Frustrated at every turn

In the attempt to recover the coconut levy funds used in 1983 to purchase SMC shares, state lawyers, as the New York attorneys experienced, faced a phalanx from the nation’s top law firms, and were frustrated at every turn.

The 14 companies were set up under the Coconut Industry Investment Fund (CIIF) in an elaborate scheme, government lawyers said, conjured for Cojuangco by legal eagles in Accra, the premier law firm in the land, to defraud the farmers.

A young Accra lawyer at the time recalled a colleague who came up with a naughty idea to name the companies after the firms’ associates. That’s why some of them bore the initials of Senators Edgardo Angara, Franklin Drilon and the late Raul Roco. These people said they were simply nominees and had nothing to do with the activity.

Barbarians at the gate

Court records show that these CIIF companies had acquired P1.650 billion worth of SMC shares and Cojuangco another block of shares worth P374 million—all purportedly financed, either directly or indirectly, from loans from UCPB and the state oil companies. The amount totaled P2 billion.

The portfolio was acquired as the SMC management was battling barbarians at the gate seeking a piece of the action in this beer-guzzling nation, ostensibly with the blessings of Malacañang. It comprised 51 percent of the SMC shares—31 percent designated in court litigation as CIIF shares, and the other 20 percent tagged as the Cojuangco shares.

The government contended that the loans were repaid using levy funds or earnings from the state-owned oil mills.

In 2001, a new solicitor general, Simeon Marcelo, a private prosecutor in the impeachment trial of President Joseph Estrada who was ousted earlier that year, stood before a hushed Supreme Court ranged against the best lawyers money could buy to argue the case. At issue then were the voting rights of the sequestered CIIF shares in UCPB.

Consumed by the justness of his cause, Marcelo passionately argued that the CIIF shares were acquired with public funds and therefore should be considered public and returned to the farmers.

Accepting his argument, the Supreme Court ruled coconut levies were “prima facie” public funds, that these came from the pockets of the coconut farmers as tax deposited in UCPB.

The 2001 ruling on the UCPB shares ruling gave hope to the farmers, only to be dashed on April 12 this year, when the court ruled that the other contested block of shares under Cojuangco’s name belonged to him. It held that the government had failed to prove its case, that Cojuangco was not a Marcos crony, in what a dissenting justice described as the “biggest joke to hit the century.”

As the case dragged on, the question that lingered was why the government had not worked out a compromise on the case and many others involving alleged plundered wealth.

Before the dictator died in Hawaii on Sept. 28, 1989, Imelda called Salvador Laurel, Aquino’s estranged Vice President. She was sobbing, pleading with him to come and see the dying Marcos.

“He wanted me to deliver a message to Cory,” Laurel was quoted by his wife Celia in her book titled “Doy Laurel,” written after her husband died in 2004.

“Please tell Mrs. Aquino to stop sending her relatives. They are proposing so many things. All I want is to die in my country. Tell her to let me come home. I will turn over 90 percent of all my worldly possession to our people. I will ask only 10 percent for my family. That is much better than what her relatives are asking,” Laurel quoted Marcos as telling him.

Cory Aquino refused to see Laurel, a former senator who had organized the opposition during the martial law years, gave up his own lifelong ambition to become president to rally the anti-Marcos forces behind the widow of his boyhood friend in the snap election of 1986 that preceded the revolution. Instead, she urged Laurel to reveal the Marcos message to the public. He refused. He said he was only the messenger.

To this day, most of Marcos’ reported billions of dollars of plundered assets have been largely untouched. Allegations of corruption against him have never been proven in court.

In 1998, Imelda boasted that the Marcoses “practically own everything” in the Philippines—businesses ranging from telecommunications to real estate, to newspapers. She vowed to recover assets worth P500 billion from those holding them in the name of the family. A swank mall still plays her favorite song, “Dahil sa iyo,” whenever she comes to shop.

Mother of all scams

Cojuangco, now 75, returned from exile in November 1991—seven months before the end of Cory’s term. In a statement, he declared that in his absence and with much publicity his properties were seized and he had been accused of serious crimes against the state.

“Let me make clear that I have not stolen or taken any property from the government or anybody else in violation of law, in breach of any moral rule or to the damage of our country and people,” he said. He denounced the “frivolity and baselessness of the charges” against him and vowed he would vindicate himself in courts.

Cojuangco went on to rebuild his political and business interests. He formed his own political party, the Nationalist People’s Coalition, and used it in an unsuccessful bid to contest the presidential election of 1992. Although he lost, his party is regarded as one of the most influential in the nation and he himself is considered a sort of a “king maker.” Now chair and CEO of SMC, he was one of his nephew Benigno Aquino III’s major contributors in the May 2010 presidential elections.

The Supreme Court decision of April 12—affirmed on Tuesday when it threw out a motion for reconsideration filed by lawyers on behalf of the farmers and the PCGG—is regarded as one of the most important legal victories the business tycoon has scored in his attempt at redemption.

“It is a triumph for the Marcoses and Cojuangco,” Romeo C. Royandoyan, executive director of the nonprofit Philippine Center for Rural Development, says of the ruling. “It is also the legitimization of the mother of all scams.”