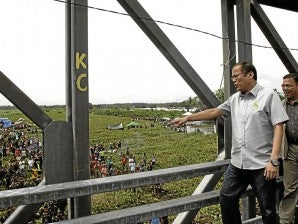 THE GRAND GREEN RIVER. President Aquino standing on the Delta Bridge points to a section of the Rio Grande de Mindanao river carpeted with water hyacinths during his inspection of the flooded areas in Maguindanao on Wednesday. About 20 hectares clogged by water lilies had to be cleared often by hand. Two and a half hectares remain to be cleared. Trailing the President is the Presidential Security Group commander, Col. Ramon Chito Mateo Dizon. MALACAÑANG PHOTO

After surveying the devastation from the air, President Benigno Aquino III on Wednesday checked on disaster relief efforts in Cotabato City and vowed more aid for ravaged communities in their “war versus water hyacinths,” a green menace being blamed for one of the worst floods in Mindanao in recent years.

Mr. Aquino conducted an aerial inspection of the clogged Rio Grande de Mindanao as public works and military personnel worked round the clock to clear the mighty river of up to 20 hectares of water lily growth.

Authorities say the lilies’ unhampered spread had caused the river to overflow after days of heavy rain. Floodwaters have submerged at least 37 villages in Cotabato City alone and displaced some 6,000 families.

Mr. Aquino said the government would study long-term plans to control the growth of the water lilies, aside from just removing them from the river.

He said the plants may also be harvested on a commercial scale and turned into fiber or biofuel.

Mr. Aquino said he would ask the interior and science departments to conduct feasibility studies on the possible use of water lilies as alternative energy source.

“I assure you that even when I’m back in Manila, the removal of the water lilies will continue,” the President said in a media briefing.

“The government will definitely help you and the local governments resolve the problem of water hyacinths,” Mr. Aquino said.

In its report to the President, the National Disaster Risk Reduction and Management Council (NDRRMC) said a total of 48 municipalities and five cities in four regions in Mindanao had been affected by flashfloods.

As of June 15, at least 7,025 hectares of agricultural lands have been damaged in Central Mindanao, while some 5,300 hectares have been destroyed in Maguindanao alone.

Widespread flooding due to unusually heavy rains in many parts of the country has killed 14 people in recent days, according to a report by Agence France-Presse, citing figures from the NDRRMC.

A total of 10 people drowned in villages lining the Pulangui, one of 11 rivers in Mindanao that overflowed their banks, the report said.

In two other incidents in Mindanao, a girl drowned in Cotabato City and a man was killed by the overflowing Lanang River.

Large areas of Mindanao recorded more than two and a half times the normal level of rainfall in the first half of June, said weather bureau climatologist Edna Juanillo.

“This is quite abnormal,” Juanillo told AFP.

Also on Wednesday, several Catholic bishops across the country called on local parishes to hold a second collection during Mass starting this Sunday to raise funds for the Mindanao flood victims.

Caritas Manila, the charity arm of the Archdiocese of Manila, has also pledged P100,000 in assistance.

Based on an assessment by the bishops’ National Secretariat for Social Action, around 25,000 households in Cotabato City have been affected by the flooding in the province.

Of this number, 6,000 families were in evacuation centers, which lacked bathroom and toilet facilities, it said.

The Philippine Coast Guard on Wednesday said it had also sent personnel to help declog the Rio Grande.

The PCG commandant, Vice Adm. Ramon Liwag, said the PCG had also sent the vessel BRP Romblon as well as crewmen from its Cotabato station and the 306th PCG Auxiliary Squadron.

Liwag said teams from the BRP Romblon and the Cotabato station will conduct a survey on the volume of water lilies and siltation levels in the river.

“The result of the survey will be used by the flood crisis committee of the province,” Liwag said. Reports from Charlie Señase and Rosa May de Guzman-Maitem, Inquirer Mindanao; Jocelyn Uy and Jerome Aning in Manila; and AFP